Saddle Up for the Wild, Wild West

When you think of western fiction what writers come to mind? Naturally one would be quick to name the modern genre greats such as Louis L'Amour, William W. Johnstone, Larry McMurtry, Cromac McCarthy, Elmer Kelton, Ralph Compton, or even lesser known western writers such as Dirk Fletcher, Luke Short, or Tabor Evans. If you read westerns regularly, chances are you recognize most of these writers in that genre. But, did you know that Robert E. Howard wrote westerns?

Long before any of the above mentioned names, Robert E. Howard was writing and publishing western short stories. That's right, the creator of the Sword and Sorcery (a.k.a. Heroic Fantasy) genre also wrote westerns. Obviously Howard's heroic fantasy stories are unarguably his most popular stories, but let's not be so quick to dismiss other genres this tale spinner worked within. Howard wrote westerns that were comic and dialect, serious westerns, as well as weird westerns. 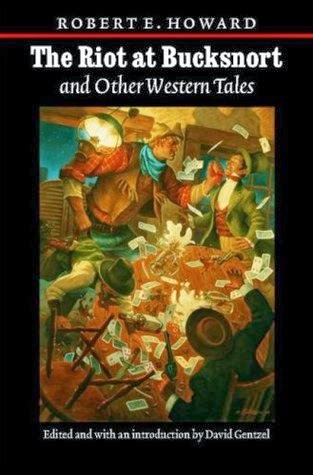 In fact his humorous westerns can be found in an out of print collection titled The Riot at Bucksnort and Other Western Tales edited by David Gentzel. For additional western stories Rusty Burke's edited volume titled The End of the Trail: Western Stories is a good volume to track down. Another excellent volume—still available—of Howard's western tales, including several unpublished stories and characters is titled Robert E. Howard's Western Tales—see the REH Foundation website for that particular volume. 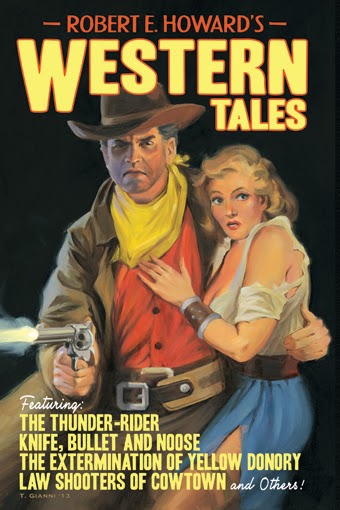 It's no surprise that Howard took to writing western stories. He was born in Peaster, and spent the better part of his days in central . This would certainly lend to his fascination with gun fighters, western outlaws, Texas Rangers, and the like. I'm sure he spent time listening to stories about "old-timers" and their tales of the old west, the gun fighters, cattle towns, etc. Also, in his own personal library Howard had several books about the wild west and famous outlaws. One such book was titled The Saga of Billy the Kid by Walter Noble Burns. Howard also mentioned Billy the Kid in a letter to H.P. Lovecraft (circa 1931). Of course all this lends to the fact that Howard was no stranger to western tales and folklore.
Many casual fans may not know that Robert E. Howard was so influenced by Texas lore, western tall tales, and stories of struggling pioneers that this influence eventually found its way into several of his heroic fantasy yarns, namely several Conan stories (e.g. Beyond the Black River). Additionally, one of Howard's more successful characters, created and published toward the end of his life was none other than Breckenridge Elkins. Elkins first appeared in Mountain Man, a humorous western story published in Action Stories Magazine Volume 12 Number 7 (March-April 1934). In fact, in my humble opinion, I think Breckenridge Elkins is one of Howard's more interesting characters (other than Solomon Kane). 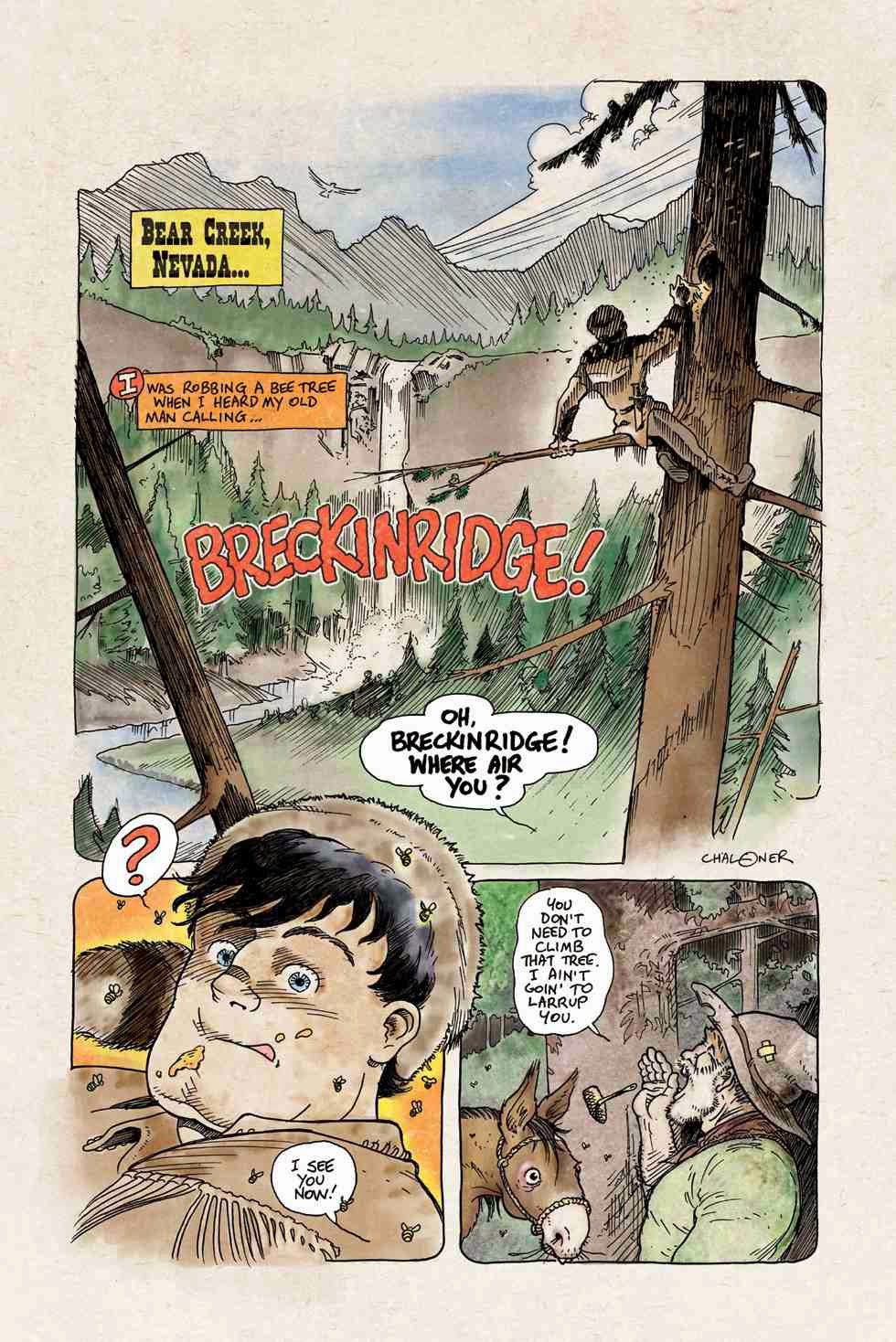 With a hearty zeal Breckenridge bursts on the literary scene high in a tree with his fist in a bee's hive. Here are the first few lines from Mountain Man, and the first appearance of Howard's flamboyant character—


I was robbing a bee tree, when I heard my old man calling, "Breckenridge! Oh, Breckenridge! Where air you? I see you now. You don't need to climb that tree. I ain't goin' to larrup you."

Gary Chaloner has done a wonderful job animating this first scene in the illustration at the left.

From these first lines Breckenridge lights up the printed page with wild shenanigans that are deeply funny and wonderful to read. Breckenridge is tough but tender and he's not really a trouble maker but always seems to find himself in the middle of trouble. And, just when you think Howard can't elevate this character any higher, he gives Breckenridge a brutish temperamental horse named Cap'n Kidd. If we stopped with just Breackenridge and Cap'n Kidd, you'd have several action packed afternoons of great reading material. One of my favorites of these stories is titled The Haunted Mountains. Howard certainly wrote one of the most hilarious and memorable beginnings to this story:


The Reason I despises tarantulas, stinging lizards, and hydrophobia skunks is because they reminds me so much of my Aunt Lavaca, which my Uncle Jacob Grimes married in an absent-minded moment, when he was old enough to know better. 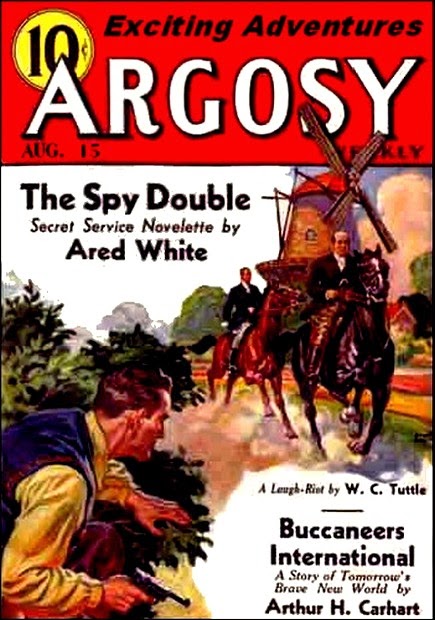 I can't think of an opening line in Howard's westerns I enjoy more than this one. Not only did it make me laugh for several minutes the first time read it, but it makes the reader really want to know just who this woman is. It should also be noted Howard created several other characters in his humorous western stories: Buckner J. Grimes and Pike Bearfield. While Breckenridge is from Nevada, Buckner and Pike make their homes in Texas. All in the same vein, these characters are humorous and larger than life. All of the humorous western stories are well worth reading.

Among the other western tales Howard wrote—the serious westerns and weird westerns—The Dead Remember is another favorite. This weird western tale is quite unconventional, especially for the time frame in which it was published: in a magazine called Argosy August 15th, 1936. The story unfolds through a series of letters and statements, not in the usual narrative fashion. It opens with a letter from the protagonist to his brother. The letter is bleak. Jim Gordon writes his brother to tell him that he is certain death is imminent because of what Jim has done to a particular witch woman and her man. From here the reader is treated with various witness statements, all of which lead to a very unusual demise for Jim Gordon.

Howard's weird westerns and serious westerns are replete with twists, turns, second guesses, action, outlaws, gun fights and the like. All very interesting, especially for those who love the western genre. Even if you don't particularly enjoy the western genre, I think it's quite possible Howard's western tales may change your mind.