Every year, the board of directors chooses articles, artwork/artists, and other people/projects as nominees for their Foundation Awards. These people & projects are nominated due to their efforts at furthering Robert E. Howard and his works in academia and popular culture. There are eleven nomination categories:
This year, many of the above categories included people/articles from this very website (On An Underwood No. 5). In fact, On An Underwood No. 5 was nominated for The Stygian and made it to the final voting stage but was ultimately beat by the ever popular and long standing website: REH: Two-Gun Raconteur. There is always next year!

Two nominees were for actual articles/series from this website:


DAVID PISKE – “Barbarism and Civilization in the Letters of Robert E. Howard and H.P. Lovecraft: A Summary with Commentary (6 parts).”

And, several of the writers/scholars who were nominated (some also won) contributed to On An Underwood No. 5. These were:


BOBBY DERIE – Contributed essays to TGR blog, On An Underwood No. 5, and compiled the The Collected Letters of REH: Index and Addenda

DAMON SASSER — Awarded for his journal and Blog - REH: Two-Gun Racontuer, also contributed an essay last year (2015) to On An Underwood No. 5

ROB ROEHM — For his biographical research published at the REH: Two-Gun Raconteur Blog, On an Underwood No. 5, and the Black Gate website.

One other first round nominee was for David Bowles who wrote an excellent article for this blog titled, "Toltec Traces in “The Thunder-Rider." Also, award winner Barbara Barrett contributed several articles here at On An Underwood No. 5: The Game's Afoot! & An Overview of Robert E. Howard's Poem: "The Ballad of King Geraint". Barbara tied with David Piske for the The Cimmerian Award — Outstanding Achievement, Essay (Online) for her series at REH: Two-Gun Raconteur titled “Hester Jane Ervin Howard and Tuberculosis (3 parts).”

This is quite a showing from this little blog in a single year. As editor of this blog, I am quite proud to have participated in all the above. But it should be pointed out that of those listed above, two are regular contributors to On an Underwood No. 5.

The first of these is, Bobby Derie. This year Bobby won two REH Foundation awards:


The Atlantean Award — Outstanding Achievement, Book (non-anthology/collection), for his book titled The Collected Letters of REH: Index and Addenda (which I have used and am currently using for research).

And, The Venarium Award — Emerging Scholar.

It should also be noted that Bobby Derie is a well established H.P. Lovecraft scholar. And, with regard to Lovecraft studies Derie is the author of Sex and the Cthulhu Mythos. Derie has contributed a number of high quality articles here at On an Underwood No. 5 over the past year.

The second of these is, David Piske. Piske has written one of the more popular series (in terms of clicks on the series) here at On An Underwood No. 5. Not only was this Piske first year to even be nominated for an REH Foundation award, but he actually won an award:

The Cimmerian Award — Outstanding Achievement, Essay (Online) for his series “Barbarism and Civilization in the Letters of Robert E. Howard and H.P. Lovecraft: A Summary with Commentary.”

Piske is also wrapping up his award winning series, "Barbarism and Civilization in the Letters of Robert E. Howard and H.P. Lovecraft: A Summary with Commentary." So, readers can expect a few final posts on that series in the near future.

My goal for 2015 and 2016 was to raise the quality and standard of articles that appear at On An Underwood No. 5. I think I've accomplished this. I hope to be able to continue that standard in the years to come. However, I must admit that it is very time taxing and difficult to get solid writers/scholars lined up to write for the blog. I've invited at least a half-dozen other scholars/writers to contribute to On An Underwood No. 5, several have said they would when their schedules clear up or they can find the time.

In the meantime, I'll try my best to provide a few articles over the next months. However, I am currently working on a book to be published by The University of Texas Press about the last 6 years of Robert E. Howard's life. This work, of course, will keep me extremely busy. Cheers! 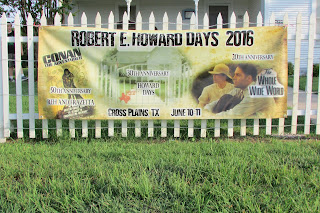 This year was my fourth year attending Robert E. Howard Days. The annual pilgrimage to Cross Plains has become a special event for me, but this year it was even more so for several reasons. For one thing, coming to Cross Plains early afforded a chance to take part in a tour that wasn't officially part of REH Days. Secondly, Howard Days experienced a couple "firsts" this year. Also, as with the last three years, I was pleased to reconnect with friends, and make several new ones. Adding to the significance of this year's celebration, 2016 marks many anniversaries related to Robert E Howard. Three in particular were observed at the celebration last week: the 50th anniversary of the publication of Conan the Adventurer from Lancer Books, the 30th anniversary of the very first Robert E. Howard Days, and the 20th anniversary of the release of the film The Whole Wide World. These were observed and celebrated through panels dedicated to each, and by the guest of honor, Michael Scott Myers, screenwriter of The Whole Wide World.

As always, I went to Cross Plains with my friend Todd Vick (editor and host of this blog). We arrived on Wednesday night. I didn't know what there would be to do in Cross Plains two days before the event, but I'm always willing for an extra day or two of vacation. To my surprise, I learned that it pays to show up before the official start of Howard Days. The Howard Home and Museum is a natural rallying point for pilgrims, and we weren't the first ones who decided to arrive early. Let the fellowship begin.

On Thursday the Cross Plains Review held a tour of its facility. Founded in 1909, the Review is the town's longest running business, and one of Texas' oldest continuously running newspapers. Jack Baum served as our tour guide, noting an interesting connection between the paper and Robert Howard. Around 1925 Howard worked briefly for the paper, reporting oil news. And since Baum had worked extensively on the paper's printing machines as a boy, he guided us around through the process and explained the tense and often dangerous job of getting a paper to press. Antique fixtures still installed at the paper include a 1922 Linotype, several type cabinets, a guillotine-like newsprint cutter (on which several people lost fingers over the years), and the highlight: an original Babcock printing press, which is so massive it had to be set on the property's foundation before the building was even constructed. As an added bonus original copies of the Review from 1936 were displayed. Pages included obituaries of Robert's and Hester's deaths, and Robert's story, "A Man Eating Jeopard," which was published a week after his death. These come from the Southwest Collection at Texas Tech University, and were brought by Rob King, who has been working on digitizing original copies of the paper (which can be viewed here [www.collections.swco.ttu.edu]}.

Activities on Friday always start in the morning with registration at the Howard house. It's a good time to to meet up with other arriving attendees and peruse the tables at the "REH Swap Meet" under the pavilion. In a quiet moment I picked up a few new volumes for my small but growing REH library at the museum gift shop/obsession-enabler, and a bit later I got to spy two original issues of Weird Tales that Patrice Louinet was displaying (to everyone's envy).

All of the day's panels were held at Cross Plains High School; the first of these, "Thirty Years of Howard Days" took place in the school's library. Rusty Burke and Bill Cavalier told stories about their first pilgrimages to Cross Plains, and related how the annual gathering we now know came to be gradually organized. And Susan McNeel Childers of Cross Plains told stories from the hometown perspective. Similarly, during the Q/A segment, Cross Plains native and former holder of the Howard estate rights, Jack Baum, talked about the growing receptivity of the town to Howard pilgrims.

A Brief Word on the 80th Anniversary of Robert E. Howard's Death by Todd Vick

I was in Cross Plains, Texas this past June 11th on the 80th anniversary of Robert E. Howard's death. Along with around 400 or so people (townspeople included), we were there celebrating, not the death of Howard, but his life and works. Several people mentioned this was the 80th anniversary of the writer's death. Many of us raised a glass in his honor, read poetry he had written on his front porch, and presented panel discussions about his life and works.

I spent from Wednesday to Sunday morning in Cross Plains. I met many new faces (this was my 5th year attending the annual event), shook hands with old friends, and participated in some meaningful conversations. If you've never experienced a Howard Days in Cross Plains, TX, and you're a Robert E. Howard fan, then you are missing something quite special.

Below are two images of the actual story in the Cross Plains Review, June 12th, 1936 (these scans are of an actual copy of the newspaper. Parts of the right edges of the paper have been worn away from wear over time):

To say the death of Robert E. Howard was a tragedy is certainly an understatement. He left a large gap not only in the pulp fiction world (esp. in Weird Tales) but also in the general world of fiction. Even so, his works have survived in magazines, academic journals, books, anthologies, and his characters are seen on television, the big screen, comic books, RPG and board games, as well as video games. Howard and his works have become an international phenomenon!

Robert E. Howard's impact has sent waves across the world to a variety of people from all walks of life. And just imagine, it all started in the small central West Texas town of Cross Plains, where his life and works are still celebrated.