The Weather is Good but the Beer is Lousy by Todd B. Vick

In the middle of June 1935, Robert E. Howard and his friend Truett Vinson took a trip to New Mexico, visiting the historic town of Lincoln, New Mexico. While on this trip, Howard sent two post cards two postcards to Novalyne Price.

At the time, Howard and Price had dated one another for a little over a year. However, by June of 1935, Howard and Price were on the verge of a falling out, and Price began dating other men: Pat Allen of Cross Plains, and Truett Vinson of Brownwood. It is most likely that Howard knew Price and Vinson were dating while Howard and Vinson traveled to New Mexico. If Howard knew, he was not letting on that he knew.

While on the trip, Howard purchased two postcards to send to Price. The first is postdated June 19, 1935.

Here is the front of that postcard:


The back (top left) of the card details the front's picture: 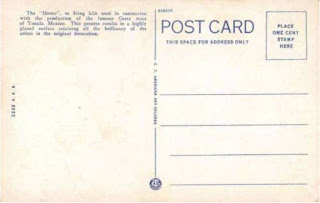 "The 'Horno,' or firing kiln used in connection with the production of the farmers Greta ware of Tonola, Mexico. This process results in a highly glazed surface retaining all brilliancy of the colors in the original decoration." (The above and below cards are not the actual postcards REH sent to Price, just a copy of the same postcard).

Howard wrote a brief message on the back of this postcard:

The weather is good but the beer is lousy. Hoping you are the same.

Price details in her book, One Who Walked Alone (OWWA), that she got a kick out of this postcard, especially what Howard wrote. She stated, "I laughed like everything when I got it. It was so typical of Bob's trying to make a funny joke—his kind of humor. I liked it too." (228) 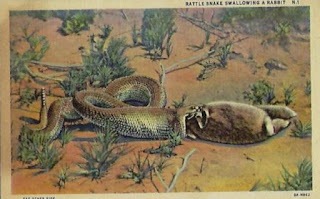 The back (top left) of the card details the front's picture: 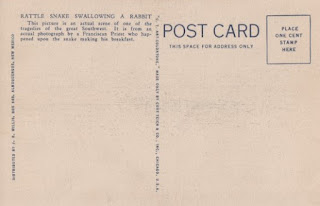 "This picture is an actual scene of one of the tragedies of the great Southwest. It is from an actual photograph by a Franciscan Priest who happened upon the snake making his breakfast."

The only thing Howard wrote on this card was:


About the second postcard, Novalyne reports (in OWWA), "The next day, I got another card. The picture on that one was gruesome, and I would have liked to hit Bob hard when I saw it. It was an actual photograph of a rattlesnake swallowing a rabbit. He had done that to horrify me. And it did. There was no message on the card . . . Just "hello" and "goodbye." (229)


There's likely no motive for sending these cards if Howard knew that Price and Vinson were dating (maybe). He and Price were still on good terms, and continued dating in a friendly fashion until she moved to Louisiana in May of 1936.