By the Phoenix on This Sword I Rule! By Karen Joan Kohoutek

“If I could but come to grips with something tangible, that I could cleave with my sword!” 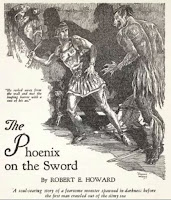 When Robert E. Howard revised an unsold tale about King Kull, the gloomy ruler of Valusia, he replaced that character with Conan, a barbarian king in a similar position, who would later be fleshed out with a wide-ranging history, and a multiplicity of formative experiences. Along the way, the character turned from an Atlantean to a Cimmerian, and his eye color from gray to blue. His personality also changes in some significant ways, from the original “By This Axe I Rule!” to the available early draft of “The Phoenix on the Sword,” and again to the version of that story published in Weird Tales in December 1932.

As Patrice Louinet says in his appendix to the collected Kull stories, “by writing the first Conan tale on the ashes of an unsold Kull story, Howard was telling us that he now envisioned the Kull series a prehistoric one, which paved the way for the Conan stories” (289).

The Conan who becomes the canonical version deals with court intrigue and attempts to usurp his power, in ways that are similar to the situation in “Axe.” There is a critical difference, in that Conan never declares “I am king!,” because he doesn’t have to. A line about his suffering from the tedious “matters of statecraft” line is taken almost word for word from the Kull story (11, 161), but Conan starts the story with a confidence that Kull had lacked. In “Axe,” Kull, already the king in name, comes into his full authority, an intriguing pivotal moment in a ruler’s career. Unlike Kull, Conan developed his full personal authority before he was in a position of recognized leadership, and even when other characters in the story reject his rule, it’s because of their own personal desire for power.

This isn’t a criticism of Kull’s character, but a reflection on the different, if related, themes their stories explore. The situation in “By This Axe” is, despite the presence of an Atlantean, fairly realistic, and something not often explored: a turning point in which a ruler comes into true confidence as a leader. The themes of the Kull story are still embedded in the Conan story  when does someone with authority in name really take on authority as a true leader? — but are expanded upon, dealing more with the longer-term consequences of taking on the crown, and the process by which a ruler’s authority becomes fully accepted by his subjects.

In each story, the hero takes from the wall “an ancient battle-axe” (“ax” in the Conan version) which had hung there “for possibly a hundred years” (Kull 173), or at least “half a century” (Conan 21). The connotations of the axe, especially given the emphasis on its age, link it to the barbarian nature of the main characters. When Kull takes up the titular axe, he claims a personal authority that comes out of his past: who he is and where he came from. Since it belongs to Valusia’s history, the axe is associated with Kull’s formal authority, embedded in the royal structure and government, but it also reflects his primal essence, which he uses to cut through hierarchical, bureaucratic tangles. This satisfying moment hearkens back to a time before the society had become so complex, with a confusing maze of laws and traditions built up over the generations, some of them useful, but some of them unjust and no longer worth following.

Email ThisBlogThis!Share to TwitterShare to FacebookShare to Pinterest
Links to this post
Labels: By This Axe I Rule, Conan the Cimmerian, Karen Joan Kohutek, Kull, Robert E. Howard, The Phoenix on the Sword

A 2018 Howard Days Highlight: T-Shirts by Todd B. Vick 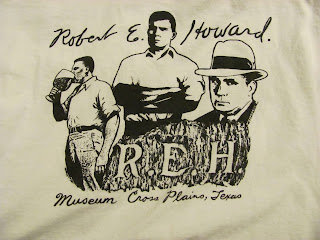 Every year I attend Howard Days, seeing the Howard House and Museum is a highlight, especially if the shop at the back of the house has new items for sale. This year was no exception. Among the items that were for sale in the museum shop this year were t-shirts with new designs. It's not easy finding REH themed t-shirts, so getting new designs at the REH House and Museum is a nice plus. 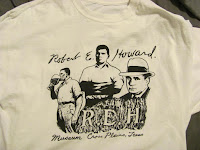 I'm a t-shirt and shorts wearing kind of person. In fact, if I were 'allowed' to wear nothing but, that's what I'd wear all the time. In years past, I've bought at least a dozen different t-shirts at the Howard House museum. About 5 or 6 years ago, the museum shop had a t-shirt with a cool design by Michael L. Peters, and I've bought several of those over the years. A couple of years ago there was a minimalist t-shirt that had a single emblem, the REH House & Museum, on the upper left area of the shirt. But this year, the museum shop had two new t-shirt designs for sale, and as soon as I saw them, I snatched them up. 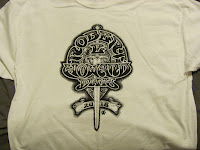 The first design has REH's signature across the top and "Museum, Cross Plains, Texas" across the bottom. There is also a picture of REH in the middle going through his signature, and on either side of the middle pic, two other pictures of REH, with Bill Cavalier's grave-site-foot-stone penciling at the bottom. Pretty cool, at least I thought so.

The second design, which sold out (I think in all the sizes), was a drawing by James Carter. This t-shirt design was a sword going through the words Robert E. Howard Days, with a banner that read 2018 at the bottom, and had a bit of a Virgil Finlay look and feel to it. Cool looking design, and I can see why it sold out.

If you were unable to attend Howard Days but still have an interest in buying one of these t-shirts (they have various sizes), then I am fairly certain that the museum is likely still selling them. You can always call this number, (254) 725-6562, and order one. 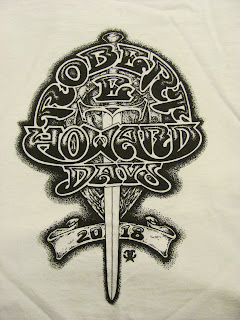 Every year at Howard Days, someone (or several someones) has a table set up for you to buy books, collectible magazines, fanzines, pulps, etc. This year was no exception. Even so, there were several books at several tables that set this year's wares apart from previous years.

First, Bobby Derie (who also presented on several panels) set up a table and gave away (yes, gave away . . . you know, for free!) three books that he put together (one that Howard boxing scholar, Chris Gruber, helped with). The first of these three is titled, Essays on Robert E. Howard & Others. Even if there were nothing between the covers of this book, the cover alone would be worth having. The cover (front and back) consists of a bunch of pictures of various pulp writers place together to form an over-all image of Robert E. Howard. Very cool! This book is a collection of essays that Derie had published between 2015 to 2017 at Damon Sasser's now defunct blog Two-Gun Raconteur, here at On An Underwood No. 5, Messages from Crom blog, and in print in the Lovecraft Annual. To have all these in one collected volume was a great idea. The second book is titled A Robert E. Howard Sampler. This is a collection of Howard's works edited by Chris Gruber & Bobby Derie. Gruber has an introductory essay and Derie wrote brief essays to introduce each section. The sections consist of sword & sorcery, weird fiction, boxing, western, poetry, detective, historical adventure, fantasy, science fiction, and H.P. Lovecraft's In Memoriam: Robert E. Howard essay. The third book is an index to One Who Walked Alone by Novalyne Price Ellis, and Day of the Stranger by Rusty Burke & Novalyne Price Ellis. This small book is a nice edition to any researcher's library, especially for quick reference to these two works.

Second, Skelos Press had a table and this year they were selling Patrice Louinet's (another presenter on this year's panels) anticipated book titled The Robert E. Howard Guide. It was originally published in France several years ago, and Louinet recently translated it into English and published it through Skelos Press. It is an excellent intro to Robert E. Howard, and a must read for Howard beginners. The book deals with a history of common misconceptions that have arisen and developed over the decades. These misconceptions have sometimes been somewhat damaging to Howard's reputation, sometimes they've distorted his works, and too often they've confused readers and fans about the writer, his works, and his life. Louinet does a first-rate job of clearing up those misconceptions. The misconception section is followed by a brief biographical section about Howard, his up-bringing, life in Texas in the early 20th century, etc. Then there are two chapters of recommended stories to read from Howard. The first of these two chapters cover "must-read" stories, each has a small bit of publishing history and summation of the tale itself. This is followed by another chapter that details twenty more stories you "should" read, with the same format of information, for a total of forty Howard stories.

Louinet then turns his attention to Howard's most famous character, Conan the Cimmerian. He discusses the barbarian's history, how he has been used (and abused) in pastiches, film, comic books, video games, board games, etc. This chapter is followed by various adaptations of Robert E. Howard's stories in motion pictures (e.g. Conan the Barbarian, Solomon Kane, etc.), as well as television adaptations such as Boris Karloff's early 1960s adaptation of "Pigeons from Hell."

Other nice features of this book include Howard's correspondence with Lovecraft, current places to read about Robert E. Howard, and things such as collecting Howard ephemera, and such.

As far as a basic book to introduce anyone interested in the works and life of Robert E. Howard, this is now the go-to book. It does have some editorial issues throughout (I'm not sure whether Skelos Press proof-read and/or edited the text, they should have if they did not), and there is one somewhat big blunder in the book that, once again should have been caught by the editors at Skelos Press. The blunder is that Louinet attributes the creation of Weird Tales magazine to William Sprenger (who was actually the business manager of the magazine) and not J. C. Henneberger (and J. M. Lansinger), who actually created and established the magazine. Otherwise, this is an excellent book and well worth investing your money ($14.95 price tag) and your time. Hopefully, Patrice Louinet will publish more works here in the U.S. since he is considered by many to be one of the foremost scholars on Robert E. Howard's life and works.

Third, The Robert E. Howard Foundation, as usual, had their table set up and were selling the much anticipated volume titled, Pictures in the Fire: Remaining Weird Tales and Esoterica, edited by Paul Herman. From the inside flap: This volume is mostly comprised of weird and horror stories, along with a bit of juvenilia, fragments, poetry, and assorted odds and ends. The front and back cover art is drawn by Bill "Indy" Cavalier (who was the guest of honor at this year's Howard Days, and a long-time fan of Robert E. Howard). If you do not already have a copy of this book, you better hurry and get one, it is likely to sell out fairly fast.