In The Two Bobs: Robert E. Howard and Robert H. Barlow it was mentioned that after the death of their mutual friend H. P. Lovecraft, Barlow became the literary executor for Lovecraft’s estate—which included the disposition of the file of letters from Robert E. Howard. Several letters pertinent to Barlow’s possession of these letters and efforts to get them to Dr. Isaac M. Howard, the late Robert E. Howard’s father, have been made available online by Brown University as part of their digitization of the Lovecraft materials, and make interesting reading concerning the posthumous afterlives of Barlow and his two literary correspondents.

After Lovecraft’s death, Robert H. Barlow was made his literary executor; the young writer took steps to archive Lovecraft’s correspondence and other papers at the John Hay Library, where Elizabeth Spicer worked. The “Sterling” items were presumably related to Kenneth Sterling, one of Lovecraft’s later correspondents and his collaborator on “In the Walls of Eryx.” Barlow wrote this on his way back to Kansas City (“KC”) where he was attending the Art Institute. Hawk on the Wind” Poems (1938, Ritten House) was a collection of August Derleth’s poetry, containing “Elegy: In Providence the Spring…” regarding Lovecraft.

Barlow’s desire to keep the correspondence from Lovecraft’s correspondents “out of the catalogue” was probably in an effort to protect their privacy; Howard was at this point already deceased, so this was less of an issue.

By May of 1937, Dr. Isaac M. Howard had determined that Barlow was the executor of Lovecraft’s estate and was in possession of the letters from his son Robert E. Howard that Lovecraft had saved, mentioned above; Dr. Howard wrote to Barlow and to Lovecraft’s surviving aunt asking for their return, but did not receive a prompt reply, probably because Barlow’s situation was unsettled—the young writer would soon head out for California (IMH 164, 166).

As Howard letters were actually at the John Hay Library while Barlow was in Kansas City, this might explain some of the delay and confusion, but Barlow did eventually respond to Dr. Howard’s request. 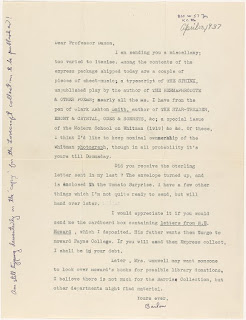