Now that I have a bit more time to blog, I’ve decided to do a series about certain writers Robert E. Howard encountered in his life. Each post will cover one author whose work had some kind of influence on Howard’s life (as a reader) and/or his own work (as a writer). To inaugurate this series, I’ve chosen James Branch Cabell.

Cabell was born April 14, 1879 in Richmond, Virginia, to an affluent family of medical doctors and politically connected Virginia ancestors. Because of this, Cabell was raised in what many believed to be an aureate environment. At fifteen, Cabell was enrolled in the prestigious College of William and Mary. He graduated four years later at age nineteen. Even then, Cabell was a master wordsmith and linguist, with a strong command of several languages. So much so, he taught French and Greek courses as a nineteen-year-old. He later became a journalist and began writing short stories and essays for Harper’s and the Saturday Evening Post. The latter being the most likely place Howard first encountered Cabell’s work. Cabell would eventually write novels, of which Jurgen: A Comedy Of Justice (1919) would be one of his most popular.
Cabell’s work has ebbed and flowed in popularity over the past century. When Cabell was alive and writing, H. L. Menken and Sinclair Lewis held the esteemed writer in high regard. Predominantly popular with the reading public of the 1920s and 1930s, Cabell wrote fantasy fiction, fictional satire, and was a master writer of essays written primarily for their aesthetic effect.; the latter likely being the main reason Menken enjoyed Cabell. Simply stated, Cabell was a wordsmith of the highest order. To be such and reach the masses required a near perfect balance between the common and highly sophisticated, a balance not easily reached by too many writers in literary history. This is also probably the reason Robert E. Howard enjoyed Cabell’s work, though the two writers are diametrically opposite in their styles and interests. Cabell’s sophisticated humorous sexual innuendos are what Howard most likely enjoyed.
Cabell had little influence over Howard as a writer. Howard's humorous fiction was never as elaborate or as sophisticated as Cabell's, but much more low-brow and jocular; a slapstick style like the vaudevillian performances. The only time Howard ever emulated Cabell’s style was when he wrote his so-called book review of Cabell’s Something About Eve for The Junto. Besides the Junto, other places Howard’s review can be found is Amra volume 2, number 47 (August 1968), The Conan Grimoire (Baltimore: Mirage Press, 1972), and The Spell of Conan (New York: Ace Books, 1980).  In the Junto review, Howard assumes that the other Junto participants may have not heard of James Branch Cabell. He wrongly assumes this because he thinks that Cabell is not widely read. That might have been the case in the central Texas area of Cross Plains, but it was certainly not the case among  the broader population of readers in the United States and around the world. Cabell was, in fact, a quite popular author at the time Howard wrote his review of Something About Eve.

In his review, Howard calls Cabell the ablest writer of the present age. Along with many other readers back then, Howard was seized by Cabell’s command of the English language. Something About Eve is Cabell at his finest. But Howard is especially attracted to Cabell’s cynicism, something to which Howard could relate. Cabell pokes fun at his own art, his readers, and the world in general. In Something About Eve, his sardonic humor is communicated through a nineteenth century romance gone awry that bores the protagonist so much he quickly acquiesces to the devil’s invitation of a wild promiscuous adventure elsewhere. In his Junto review, Howard’s focus is not on the plot or events of the Cabell’s novel so much as on the sexual innuendos, the way women are presented in the story, and Cabell’s linguistic prowess. In his review of Something About Eve, Howard attempts to emulate Cabell’s linguistic style. As far as I’ve been able to determine, this is the only place Howard does this. It’s uncertain which edition Howard reviewed. If it was the Robert M. McBride & Company 1929 edition, illustrated by Frank C. Papé, Howard would have delighted in the illustrations and likely mentioned those in his reviews. But he did not, so there’s no telling which edition he read.
In reading Howard’s collected letters, there are two letters where Cabell is mentioned. The first, is a humorous poem (“A Fable for Critics”) Howard sent to his Brownwood friend, Tevis Clyde Smith (CL 1:272). In it, several writers are mentioned in a comical way. Cabell is mentioned, knees knocking, embarrassed at the modern school (of writers) who drank and whored. On a second occasion, in a February 14, 1936 letter (Valentine’s Day) to Novalyne Price, Howard responds to Price’s struggle with a Cabell book she was reading. Howard indicates that he has not read that particular work by Cabell, but asks her to wait a few days until he can visit and go through the book with her. (CL 3:420). The title of Cabell’s book Price is struggling with is not mentioned. But it is interesting that Howard is confident that he can help her understand its contents. This would imply that he believed he had read enough of Cabell’s work to communicate confidently his ability to understand its contents.
In late 1934 or early 1935, Howard was still buying Cabell’s work. In fact, on a date with Novalyne Price, they drove to Brownwood to visit Dublin’s Bookstore. Howard had his eye on a different edition of Omar Khayyam's The Rubáiyát. Being one of his favorite stories, he already had one copy, but this edition offered something the other, perhaps, did not. In addition, Price indicated that Howard also had his eye on a book by Cabell (OWWA, 92). She does not indicate the title of Cabell’s book, but this tells us that Howard was still actively buying and reading Cabell. Price was introduced to Cabell’s work through Howard and, on one occasion, she was apparently arguing with her cousin Mary Enid Gwathmey, likely about the sordid content of a Cabell book, which was interrupted by Gwathmey’s realization that Price was ill and had no business teaching that day. (OWWA, 123) Nothing else is said about Cabell, but this indicates that Price, probably because of Howard, was reading Cabell’s work.

I have not been able to ascertain any indication that Howard was so influenced by Cabell that his own writing style and sentence structure changed in any of his own stories. Even so, Cabell did play an important role in Howard’s passion for literature, at least of a certain kind. The strongest indication of this is clearly seen in his review of Something About Eve. After Howard’s death, Cabell’s popularity slowly waned, especially once the second world war began. However, by the late 1960s and early 1970s, with the advent of The Ballantine Adult Fantasy series, spearheaded by Lin Carter, James Branch Cabell made a brief but relatively strong resurgence in popularity. The Cabell titles chosen by Carter for The Ballantine Adult Fantasy series included: The Silver Stallion (August 1969), Figures of Earth (November 1969), The High Place (February 1970), Something About Eve (March 1971), The Cream of the Jest (September 1971), Domnei: A Comedy of Woman-Worship (March 1972). Though there are likely other titles by Cabell that Howard read, the titles we know he read include: Something About Eve and The Cream of the Jest. The latter book was part of the Howard Payne University holdings, books from Robert’s personal collection given to the college by Dr. Howard after his son’s death.
I can’t help but wonder if Howard, despite his claims that he wrote for a paycheck, and the restrictive markets he was (in a sense) chained to, secretly desired to write on a level equivalent to Cabell. Among other authors, Howard pays Cabell some of his highest praise. And though Howard, likely to save face for some silly argument, disagreed with H.P. Lovecraft's opinion that writing could be considered a form of art, Cabell was probably the one writer who might have changed Howard’s mind on that opinion.

A Letter From Seabury Quinn by Bobby Derie

Seabury Quinn was the most popular writer at Weird Tales during his lifetime, and his sales eclipsed those of Robert E. Howard, H. P. Lovecraft, and Clark Ashton Smith. Where those later writers have gained greater respectability in death, and their work published and republished, adapted to comics, film, music, and other media, Quinn’s fiction has only partially and periodically regained the notice of the public, and the study of his life and works largely neglected. In part, this is because unlike Lovecraft, Howard, and Smith, there are very few surviving letters from Quinn’s pen or typewriter, and those are mostly in private hands, unpublished, or lingering in obscure fanzines.

This is one such letter, a relative rarity both in length and content. It was written to Weird Tales fan Emil Petaja in December 1934. Around this period, Petaja had also written to and received letters back from both H. P. Lovecraft, recently collected in Letters with Donald and Howard Wandrei and to Emil Petaja from Hippocampus Press; and Robert E. Howard, the latter incident appearing in Novalyne Price Ellis’ memoir One Who Walked Alone. 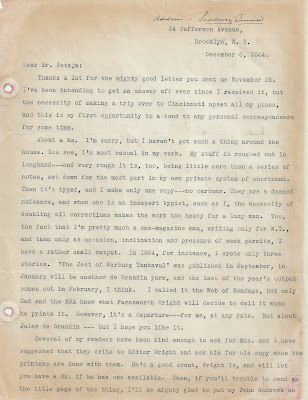 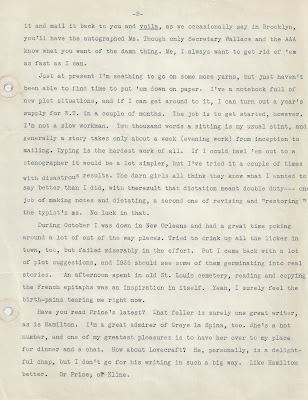 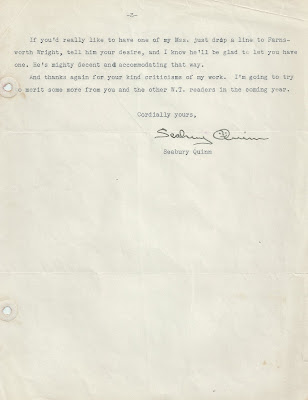 [1] Petaja, like R. H. Barlow, wrote to pulp writers asking for the manuscripts of their stories that appeared in Weird Tales.

[2] While not always a “one magazine man,” Weird Tales was the main outlet for Wright’s pulp fiction in this period, as The Magic Carpet Magazine had ceased publication in 1934.

[5] Henry Agard Wallace, Secretary of Agriculture and a supporter of Roosevelt’s New Deal administration, including the Agricultural Adjustment Act (AAA).

[7] New Orleans formed a backdrop to several of Quinn’s stories, the French epitaphs may have been a possible inspiration for “Pledged to the Dead” (WT Oct 1937). In a letter to Virigl Finlay in 1937 about illustrations for the story, Quinn wrote:

[8] E. Hoffmann Price, probably “Queen of the Lilin” (WT Nov 1934) starring Pierre d’Artois, his own occult detective. This was the last of the d’Artois stories, and Price wrote in the introduction to Far Lands and Other Days:

Quinn and I conferred. Although my Pierre d’Artois was coeval with his Jules de Grandin, so that neither could be considered as having influenced the other, Quinn’s hero had won such tremendous applause, and had appeared so many times, that I told him I did not wish to be in the position of doing pastiches. I dumped d’Artois. (xvii)

In his memoir of Quinn in the Book of the Dead, Price expanded on this:

Seabury and I exchanged letters, and I said to him, “This is not a matter to debate. As a matter of self protection, I am killing the Pierre d’Artois series, lest someone fancy that I am imitating you. Not that I would not—it is that I could not do a good job of it!” (164)

[10] Quinn and Lovecraft had met in 1931; neither was particularly fond of the other’s approach to fiction, though they recognized their respective talents.

[11] Otis Adelbert Kline, who had some early success with Weird Tales and by the 1930s had largely turned to being an agent, working with E. Hoffmann Price, Frank Belknap Long, and Robert E. Howard among others.

[12] Quinn had a habit of drawing a smiley face (and, less often, a frownie face) in the culminating Q of his signed letters; this is very typical of the signatures in his letters to Virgil Finlay, published in the Fantasy Collectors Annual 1975.