For the first years of his pulp career, Robert E. Howard acted as his own agent, dividing his working time between writing and revising stories and poems, and drafting letters to submit those stories to markets both new and established. The Texan’s access to market news was largely limited to what he could read on the pulps in the stands, industry scuttlebutt from his letters to Lovecraft, E. Hoffmann Price, and August Derleth, and the occasional guidance from editors. In early 1932, Howard supplemented this by joining the American Fiction Guild, a professional organization aimed at freelance writers, whose organ Author & Journalist contained advertisements for upcoming pulps and other market news. (CL 2.337) Around the same time, an unknown agency offered to represent Howard:

Hundreds of part-time authors have been dumped on the market, and that makes competition tougher. The part time writer is often more efficient than the professional; he’s had more time to study style and literature. An agency wrote me wanting to handle my stuff for a year or so. They bragged on what they’d done for Whitehead; I wrote Whitehead and he replied cryptically that he considered himself heap damn fortunate to have gotten out of their talons as soon as he did. (CL 2.368)

Howard turned them down, but the idea had merit: an agent devotes their energies to selling your material, freeing the writer to writing, allowing them to produce more; a good agent had representatives and connections in more markets than a lone pulpster might be aware of, and could handle the complicated issues of anthology reprints, overseas sales—or even radio serials and movie adaptations. Perhaps this is why in the spring of 1933, Robert E. Howard signed on with an agent: Otis Adelbert Kline.

Kline had been a writer in the pulps in his own right, today most remembered for his Edgar Rice Burroughs-esque serial novels like The Planet of Peril (1929), Jan of the Juggle (1931), The Swordsman of Mars (1933) for Argosy, but he was also an early contributor to Weird Tales, and anonymously edited the May-Jun-Jul 1924 issue. (WT50 84, IMH 175) Robert E. Howard was aware of Kline as a writer, and considered him a good one (CL 2.123, 302); Lovecraft was more critical, considering Kline’s fiction among “the pallid hack work of systematically mercenary writers[.]” (MF 2.560) Whatever his merits as a writer, Kline fell into being an agent; in his own words:


In 1923, I helped another writer, an old timer who had quit for eight years and with whom I had previously collaborated on songs and movie scenarios, and one musical comedy, to come back. He quickly told others of the help I had given him, and they told others, so presently, I had an agency, international in its scope. Soon I was selling the work of other writers as well as my own in foreign countries as well as the US. Presently, also, I was representing foreign publishers, literary agents and authors in this country, and similarly representing US publishers, authors and syndicates in foreign countries. (OAK 15.4)

The foreign angle was Kline’s United Sales Plan, as detailed by his friend and occasional client E. Hoffmann Price:


In addition to domestic marketing, Otis developed his Unified Sales Plan: every story which he accepted for handling in the States went to his foreign representatives. Although Otis did not by any means originate the foreign rights angle, he was a pioneer among his competitors in that he regarded every story as having foreign sales potential. He is not only increased his clients’ income—his approach won him new clients. (BOD 36, cf. OAK 5.9-12)

While much of the correspondence between Howard and Kline is no longer extant, the few letters that remain give an outline of their business relationship. Kline waived reading fees (a fee for reading a manuscript and trying to sell it), and worked on a straight commission: 10% of whatever the story sold for went to Kline. Kline, who was centered in Chicago, also had associates in other cities: if he couldn’t sell a story, himself, Kline would send it out to an agent. If they sold a story, they got a 5% commission, on top of Kline’s 10%. The checks generally went directly from the publisher to Kline, who subtracted his (and his associates’) commission, then cut a check to Robert E. Howard. So, for example, “Guns of the Mountain” (5,000 words) was sold to Action Stories by Kline’s associate V. I. Cooper for 1¢ per word, for a total of $50—of which Kline got $5, Cooper got $2.50, and Robert E. Howard received $42.50. (IMH 363) This practice was not always strictly followed, as magazines sometimes paid Howard directly, and he would cut a check for the commission to Kline. (IMH 372)

Heroic’s Aside (The Writers Journey) by David J. West 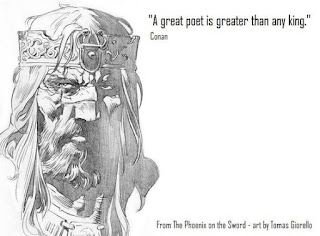 “If I was wealthy I'd never do anything but poke around in ruined cities all over the world - and probably get snake-bit.” — Robert E. Howard letter to H.P. Lovecraft

I relate to that statement quite a lot. I’ve always been fascinated with history and it informs everything I do. It is likely enough that most of this post is just me projecting, so I’d appreciate if you just bear with me.

There is just about no one I’d rather be able to sit down with for a spell and pick their brain than Robert E. Howard. His appreciation for art, poetry, history, adventure and sheer story-telling genius bowls me over.

As big a fan as I am for Conan, Kull, Solomon Kane, Bran Mak Morn and the rest, I’ve got a very soft spot for the Horror Stories of REH. I reread the newer Del Rey collection often and even have the audio book on my phone for listening to favorite shorts on quick car trips. With that in mind, I’m also fascinated with the mysterious occult that is alluded to within stories like “The Black Stone,” “Dig Me No Grave,” and “The Dwellers Under the Tomb.”

Enter John Kirowan, John Conrad, and John O’Donnell. Having three Johns must be a nod to reality being stranger than fiction because for three friends to have the same given name is just the right kind of Charles Fortianesque coincidence perfect for their stories.
Used interchangeably to relate supernatural mysteries on everything from vampires to the lost race, we get to follow along with these members of the Wanderer’s Club and share in their wonder and grim discoveries.

Now, I’ve heard/read people talk about Conan and Kull being a mirror image of Howard for this or that reason, Breckenridge Elkins too, and I can see merit in all those comparisons for various reasons. However, none of them were quite in the exact self-same era as Howard himself. However, Kirowan, Conrad, and O’Donnell are and I can’t help but wonder how much of their mystic travels and research are things Howard would have liked himself—to have been able to do himself—if the means and change in familial circumstances enabled him.
We know he loved to read and visit historic places. Because of this, in different circumstances, he might have been a member of the Wanderer’s Club. Life being what it is, we all have family duties and financial woes, so where is a dreamer to turn? To the written page in order to escape, travel, and create that wondrous ‘What if.’ And some dreams being made up of nightmare, we, of course, get terror with some of those travels. (I borrowed that from KEW)
What book reader wouldn’t appreciate, nay want, the very same collection of strange tomes and curious relics described in Conrad’s library? I’ve done what I can to recreate that myself, though I have had no luck in procuring any copy of Von Juntz’s works. Perhaps if I could get a hold of Tussmann’s?
Rereading the fragment of Kirowan and Conrad, “The House,” and relaying the history of Justin Geoffrey, I could not help but wonder how much what Howard thought played with his own otherworldly nuances, making him so much different than others in Cross Plains. Every line by Howard about the poet as touched or mad is a reflection, to me anyway, of Howard’s own view of himself; an in-joke perhaps more for himself than any reader. It is here that I may simply be projecting, because as a writer myself that is what I see when I read those lines.
If I could converse with the master himself, these are the questions I’d ask him. I’d also let him know that I owe him a great debt, and say, “Thank You,” for allowing me to accompany you on these journeys into heroic mystery and wonder. I’m eternally grateful.
__________________________
About the Author:

David J. West is the author of Scavengers: A Porter Rockwell Adventure (Dark Trails Saga Vol. 1), Heroes of the Fallen, Weird Tales of Horror, and The Mad Song. He has an affinity for history, action-adventure, fantasy, westerns and pulp fiction horror blended with a sharp knife and served in a dirty glass.

Before becoming an award-winning poet, novelist, and songwriter he was vagabonding all over North America sampling native fauna for brunch. When he isn’t writing he enjoys traveling and visiting ancient ruins with intent on finding their lost secrets or at the very least getting snake bit. He collects swords, fine art and has a library of some seven thousand books. He currently lives in Utah with his wife and children.