When & Where by Rob Roehm

While researching for his biography of Robert E. Howard, Dark Valley Destiny, science fiction grandmaster L. Sprague de Camp had to sort through quite a lot of information, some of it contradictory. While I am not a fan of the end product of these researches, I am thankful for the notes, letters, and interview transcripts that he left behind, now stored at the Harry Ransom Center in . These materials help us to see when, where, and sometimes why de Camp made some of his missteps—posthumous psychoanalysis notwithstanding. Case in point:

In the summer of 1977 de Camp interviewed Wallace Howard, a first cousin of Robert E’s. Sometime after that interview, de Camp received a typed transcription of information from the Howard family Bible, which included the following:

To my knowledge Wm. B. Howard and Eliza Henry had only 3 sons and 3 daughters.  I had always thought that David Terrel was the oldest.  David T. was 25 years old when he brought family possessions from to . Wm. B. Howard and Eliza Henry were married in 1856 and David Terrel was born in 1866 – ten years later.  So it very likely could be that Wm. Benjamin Howard, Jr. could have been the first son.

Not sure of the date but I have always thought that he [William B. Howard] died in Camden, Arkansas, before Eliza Henry Howard came to Texas.  She did not to my knowledge ever mention why they came to .

After a September 9, 1978 telephone interview with yet another of Robert E.’s first cousins, Ollie Lorene Davis nee Howard, de Camp wrote the following note: “William Benjamin Howard [. . .] died before the family moved to .”

All of the above information appeared in Dark Valley Destiny as follows: “Three sons, born to Eliza and William, were growing up. William Benjamin, Jr., the eldest, was born in 1858 and died at twenty-nine on August 2, 1888” and this:

The stable organization of the Howard family was disrupted by the death of James Henry [William B.’s father-in-law] in 1884. Perhaps on the strength of their inheritance, the Howards decided to move to ; but before they could complete their plans, William Benjamin Howard himself was stricken and died. Eliza Howard, determined to carry out her husband's wishes, sold her property—fine timberland—for fifty cents an acre, and with her children headed west. In 1885 she located on a farm in , between Dallas and Austin, near .


This last piece of information is repeated in the most recent Howard biography, Blood and Thunder by Mark Finn: “In 1884, when James Henry died, William and Louisa decided to make their fortune in . Before the move could be orchestrated, however, William Benjamin Howard fell ill and died in 1885.” Unfortunately, all of the above appears to be incorrect.


Thanks to the tireless efforts of Patrice Louinet, who tracked down the Howard relatives who actually own the family Bible mentioned above, we now have access to the source of de Camp’s information. As the close up from the Bible shown above indicates, it was not William B. Howard who died “aged 29,” though it was his oldest son, James “Jim” H. Howard. (Family legend has this Uncle Jim buried with other members of the Howard clan at in , though he has no marker.) It appears that Wallace Howard is the source of this particular error. He seems to have accidentally copied “aged 29” for William instead of “aged 61.” So, no William Jr.

With the easy one out of the way, let’s have a look at where Robert E. Howard’s grandfather might have died. Keep in mind, all of de Camp’s sources, granddaughters and grandsons of W. B., were fairly far removed from that bit of information. Fannie Dell McClung Adamson’s mother, Willie Price Howard McClung, died in 1919; Wallace Howard and Ollie Lorene Davis nee Howard’s father, David Terrell Howard, died in 1924, more than 50 years before de Camp came calling in the 1970s.

The first piece of information regarding the location of William B.’s death comes from Robert E. Howard himself, in this passage from his circa October 1930 letter to H. P. Lovecraft:

My branch of the Howards came to with Oglethorpe 1733 and lived in various parts of for over a hundred years. In ’49 three brothers started for . On the Arkansas River they split up, one went on to California where he lived the rest of his life, one went back to Georgia and one, William Benjamin Howard, went to Mississippi where he became an overseer on the plantations of Squire James Harrison Henry, whose daughter he married. In 1858 he moved, with the Henry’s, to southwestern where he lived until 1885, when he moved to . He was my grandfather.


Seems pretty clear that Robert E. Howard got these details straight from his father, Dr. Isaac M. Howard, who at that time was the last surviving child of William B. And if that’s not good enough . . . 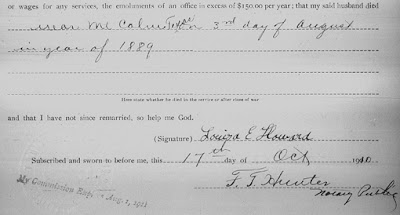 The item seen above is from a “Widow’s Application for Pension” that was filled out by W. B.’s widow in 1910. The application clearly states that W. B. died “near , on 3rd day of August in year of 1889.” This date is pretty similar to the August 2, 1888 date found in the family Bible. If Robert E. Howard’s word isn’t good enough, W. B.’s widow’s certainly should be.