An Escape from The Depression: The Fantasy Fan, Marvel Tales & The Pulps by Todd B. Vick 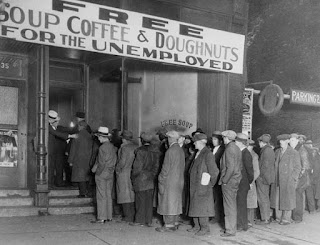 The Great Depression was the longest lasting economic downturn in the history of mankind. It not only had a deep effect here in the U.S. but the rest of the world felt its squeeze as well. Despite its woes, those who lived through The Great Depression still had to get on with their lives and try and find a way to survive. By 1933 when the Great Depression had reached its nadir, some 15 million people in the U.S. alone were without work, almost half the banks in the U.S. had closed their doors, and Americans (as well as the rest of the world) were in dire straits. However, in the midst of this nadir, the entertainment industry was booming. People were trying to forget their troubles by turning their attention to films, sports (in large part boxing), books, magazines and other distracting things.

In 1933 some of the greatest classic films were released: King Kong, Duck Soup, I’m No Angel, Queen Christina, Little Women, and others. The first drive-in movie theater was built in Camden, NJ that year, and MGM worked on gaining the rights to a film titled The Wizard of Oz. In June of 1933, Primo Carnera defeated Jack Sharkey in the sixth round (with a KO) to win the World Heavyweight Championship. That same year, Jerry Siegel and artist Joe Shuster created the iconic character “Superman.” Underneath all these hugely popular events a seventeen year old teenager was hard at work developing the first fanzine for the weird fiction genre in hopes that it would attract some of the most popular writers in the Weird Fiction and Science Fiction pulp magazine industry.

Charles D. Hornig, from New Jersey, was a huge fan of weird fiction and science fiction. He was a regular subscriber to Wonder Stories and Amazing Stories. There’s no written history/information on why or where Hornig got the idea of beginning a fanzine. Even so, Hornig contacted the editor of “The Science Fic-Digest”—Conrad H. Ruppert—in an attempt to find out how such an effort could get off the ground. Ruppert guided Hornig in his endeavors, and in September of 1933, volume 1, no. 1 of The Fantasy Fan was first printed. It is believed that Hornig, a somewhat long time reader of Wonder Stories, sent a copy to its publisher Hugo Gernsback (who has been called the Father of Science Fiction). Through a series of circumstances, Gernsback had recently fired his editor, David Lasser, and after seeing Hornig’s first issue of The Fantasy Fan, hired Hornig. This is apparently confirmed in The Fantasy Fan Oct. 1933, Volume 1, no. 2 issue. “Managing Editor: Wonder Stories” is typed in that issue under Hornig’s name on the title page.  This would certainly explain how Hornig was able to get such high profile authors during The Fantasy Fan’s existence between Sept. 1933 to Feb. 1935.

The first writers to jump on board Hornig’s fanzine were Clark Ashton Smith, H.P. Lovecraft, and August Derleth. Other writers would join the fanzine in its first year: Julius Schwarts (who would eventually make his name in the comic book industry), Forrest Ackerman (magazine editor and an agent for Sci-fi writers such as Ray Bradbury, Isaac Asimov, L. Ron Hubbard, etc.), R.H. Barlow (author, poet, and previous executor of H.P. Lovecraft’s literary estate) and Robert E. Howard. In its second year, Robert Bloch made a contribution. The circulation of The Fantasy Fan is unknown. My guess is that it was fairly exclusive. Additionally, according to Wikipedia, here are some of the new stories from weird fiction authors that appeared in The Fantasy Fan,

First publication of several works by noteworthy authors occurred in The Fantasy Fan, including works by Lovecraft, Smith, Robert E. Howard, August Derleth, and Robert Bloch. Perhaps one of the magazine's greatest achievements, though, was the serialization of the revised version of Lovecraft's Supernatural Horror in Literature (October 1933-February 1935); the serialization proceeded until it had reached the middle of Chapter VIII and the magazine folded. The Fantasy Fan also saw the first publication of Lovecraft's stories: "The Other Gods" (November 1933) and "From Beyond" (June 1934) as well as reprints (from amateur papers) of "Polaris" (February 1934) and "Beyond the Wall of Sleep" (October 1934); it also published the poems "The Book" (October 1934), "Pursuit" (October 1934), "The Key" (January 1935), and "Homecoming" (January 1935) from Lovecraft's sonnet cycle Fungi from Yuggoth. Lovecraft was represented in no less than seventeen of the eighteen issues published. The October 1934 issue was dedicated to Lovecraft.

Fortunately, a little over 5 years ago (in 2010), Lance Thingmaker put together an extremely nice hardback facsimile of The Fantasy Fan. The collection was limited to 100 copies and sold rather quickly on Ebay. In its heyday, The Fantasy Fan was a way for fans and writers to connect. Also, for those people who were reading the pulps and various science fiction and fantasy magazines, this was just another way for them to find a little escape from the hardships of the Great Depression.

In the same year that The Fantasy Fan ceased publication, another fanzine called Marvel Tales began publication.  Marvel Tales was edited by William L. Crawford. He was the first to use the name Marvel Tales which would be subsequently used again several times after Crawford’s zine ended. William Crawford was a publisher and editor who also wrote science fiction stories. Crawford lived in Everett, PA and had been an ardent science and weird fiction fan. He was also responsible for the inception of another non-paying weird fiction zine titled Unusual Stories. His Marvel Tales zine had a very short run, all of 5 issues. However, he was able to garner a few top-notch fantasy and science fiction authors of the day to contribute: H.P. Lovecraft, August Derleth, Robert E. Howard, and Frank Belknap Long.

Marvel Tales has a more mysterious history and demise than The Fantasy Fan. After the fifth issue, the magazine announced with great enthusiasm that its next issue would be on newsstands. After this last mention, no other issues were printed. It disappeared. This was probably due to its non-professional (non-paying) status and the high costs of publishing such a zine in the 1930s. It also never gained a strong enough readership to keep it alive. There is scant material written about Crawford’s Marvel Tales. Even so, in 2012, Lance Thingmaker, after the success of his facsimile for The Fantasy Fan, created a facsimile for Marvel Tales. Thingmaker did a 300 print run with the first 100 books tagged, numbered, and placed in nice slipcases.

In the 1930s, if fans of the pulps were fortunate enough to hear about these two fanzines, they would have access to original stories written by some of the more popular pulp writers. Moreover, the paper quality of these fanzines was a notch better than those of the pulps. Like films and sporting events, these fanzines and especially the pulp magazines were a nice inexpensive escape from the troubles that stemmed from the Great Depression. 1939 fanzines more or less fell by the wayside to World War II, dime novels, and the comic book industry. However, weird fiction and science fiction fanzines made a strong comeback in the early 1970s, but eventually faded again toward the mid to late 80s. Fortunately, the stories have survived through the years and are enjoying a steady growth today with a surge of new fans.

Excellent post, with maybe one or two caveats. It's important to realize that the 1930s saw a transition from the older, more formal and organized school of amateur journalism - which H. P. Lovecraft was deeply involved with - to the much more informal and disorganized fan press associated with the science fiction and fantasy pulps. I think it's actually crucial that Lovecraft and Robert E. Howard "bridge the gap" of those two generations (with "The Junto" and similar limited-circulation 'zines being a direct precursor to the APAs of the 40s and 50s). My only real caveat is the idea that fanzines "fell off" during WWII - which isn't exactly the case, though the war and attendant paper shortages likely had their effect - because there were several prominent fan publications in the 40s and 50s, which gave writers like Brian McNaughton their start.

Interesting. In my research, I did not run across fan publications (i.e. fanzines) in the early 40s while WWII was happening. Also, I did not run into anything about Brian McNaughton—certainly something to look into. Thanks for the heads up, Bobby.

"The Acolyte," devoted to Lovecraft, first appeared in '42 - and was pretty much a direct descendent of 'zines like "Marvel Tales" in the '30s. There were lots of 'zines in the 40s:

McNaughton got his start in the fan press in the early '50s; one of (maybe his first) publication was "Shanadu" in 1953, which is a bit of a mess...I have a copy in my library, picked up for book research.

I found that entry about "The Acolyte" at zinewiki after your first comment. Someone needs to put a published comprehensive history together of these types of fanzines (if there's a large enough audience of interest). It certainly is fascinating to me.

There may well be one, somewhere...I have a copy of "Ah!, Sweet Idiocy!" (1948), the fan memoirs of Acolyte publisher Francis T. Laney, and I know there's a small pamphlet on the history of British fanzines hiding somewhere in my library.