The North American Journal of Homeopathy:

A few short years ago quite a lot was written about Pellegra in the South being caused by drinking water from wells in the Southern sections underlaid with a yellow clay foundation. One writer wrote extensively on this, giving the sections of country where Pellegra prevailed more extensively, and claimed to give the geological formation of such sections, and wound up by saying that if any doubted such to be the case had only to read a Homeopath’s description of Silicea proving he would have a complete picture of Silicea.

I have read the several theories of Pellegra, and somehow what this man wrote has stayed with me. Of course there may be a better understanding of the cause now than when this man wrote, but the theory of an unbalanced diet does not hardly satisfy me. However, I want to say that I have several cases of Pellegra from time to time, but one case I have in mind who has been treated with large doses of soda cacadylate. The attacks through the hot weather season is now practically in the same condition as when she came to me three years ago.

I would certainly like some suggestions from Homeopathic physicians as to their methods of treating this disease, and particularly would I like to see Silicea proving described by a Homeopath and its treatment.


Pellagra was a vitamin deficiency caused by a lack of niacin (vitamin B3) in the diet; it was especially prevalent in diets that were based heavily on corn (maize), as most of the niacin is not available unless the corn is treated with an alkali and hulled (nixtamalization). Native American cultures dependent on corn understood this processing was necessary, but Europeans who adopted the crop did not understand or appreciate the significance, leading to outbreaks of malnutrition and pellagra throughout the globe, especially in poverty-stricken areas with corn-heavy diets, including the Southwestern United States. There were some three million cases reported after 1902, with over 100,000 deaths, and the epidemic continued for four decades. Symptoms such as Dr. Howard described above were typical:


[…] a recurrent, debilitating warm-weather sickness […] Each spring, he became anorectic and lost weight. Typically, blisters erupted on his arms and legs, and he had extreme melancholia with suicidal ideation. The symptoms worsened during the summer and abated with the onset of cool weather. (Southern Medical Journal, vol. 94, no.3, 272-273)

The cause of this malady was, by 1909, chiefly understood to be corn, but in what capacity was heavily debated, with some suggesting a toxin from “spoiled corn” and others an unknown infectious disease. Treatments were generally “unpleasant, illogical, and quixotic” and included “Arsenic, salvarsan, calcium sulfide, iron, strychnine, quinine, autoserotherapy, partial appendectomy, and static electric shock.” (Southern Medical Journal, vol. 94, no.3, 273) Dr. Howard’s own treatment of “soda cacadylate” (sodium cacodylate) was an arsenical preparation, and a common treatment for pellagrins (as sufferers of pellagra were known), with doctors prescribing large doses. (Pellagra, 1913, 220)

Another idea, promoted by Dr.  E. M. Perdue, A.M., M.D. as early as 1915 in his book Pellagra in the United States, was that pellagra was not caused by spoiled corn but by colloidal silica in drinking water, resulting in “acid intoxication,” and therefore the disease had a geographic cause. Perdue was the American translator and proponent of the idea, based on the homeopathic research of G. Alessandrini and A. Scala, who had published their findings in 1910 and 1913. It was this idea that Dr. Howard was referring to in his letter, and Perdue response was a restatement of his theory:

Forest Hall, office of Dr.s Perdue and Perdue, 1003 Forest Avenue, Kansas City, Mo., July 7, 1921.
The North American Journal of Homeopathy:
In the June number at page 505, I note an inquiry from Dr. Isaac Howard, of Cross Plains, Texas, about a writer on Pellagra who gave the geological distribution of the disease and its cause as drinking water coming from clay soils. He states that this writer “wound up by saying that if any doubted such to be the case had only to read a Homeopath’s description of Silicea proving he would have a complete picture of Pellagra.”
I am guilty. Pellagra is an acid intoxication due to ingestion of water coming from clay soils devoid of alkalies. The poisonous mineral is colloidal silica. There never will be any improvement in this finding as it is a finished research. Determined scientific facts are truths which are not altered and improved upon. Other truths may be added.
Pellagra is cured by the hypodermic administration of a 10 per cent solution of neutral sodium citrate. Give one cubic centimeter daily for thirty days, then on alternate days for thirty days longer.
This was all worked out by Alessandrini and Scala of the University of Rome. The writer was their collaborator in America. The “unbalanced diet” theory of Goldberger was devised solely as “counter research” in an attempt to belittle and obscure the research of Alessandrini and Scala in Italy and my corroborative findings in America. It has no scientific foundation, and in its inception was not even sincere.
Fraternally,
E. M. Perdue, M. D.
(North American Journal of Homeopathy, Vol. 69, 609-610)

The “Goldberger” in question was Dr. Joseph Goldberger, a Hungarian emigre who had begun studying pellagra in 1914, as head of the Public Health Service’s investigation. Conducting studies on orphanages and a state sanitarium, Goldberger successfully identified diet as the cause and cure of pellagra, and published his findings in 1921, though the exact culprit (niacin deficiency) would not be determined until 1937. (Southern Medical Journal, vol. 94, no.3, 276)

Dr. Howard’s frustration in the letter can readily be understood, given the nature of the illness, the confusion as to its cause, and the lack of understanding for its treatment. Perdue’s prescription of sodium citrate would have done nothing to address the niacin deficiency, though the period of application might have given symptoms time to abate; likewise arsenical preparations like cacodylate of soda would not treat the underlying cause or prevent resurgence, and was toxic in its own right. Whether he ever followed Perdue’s suggestion is likewise unknown, but it is interesting is that Dr. Howard turned to the North American Journal of Homeopathy in the first place.

Homeopathy was only one of three schools of medicine widely recognized in the United States during the early part of the 20th century, the others being “regular” and “eclectic,” though as scientific progress advanced and licensing and certification became more strict, both homeopathic and eclectic schools began to decline; by the 1920s homeopathic and eclectic medical colleges and hospitals were already transitioning to mainstream medicine and dropping such signifiers from their name. However, many doctors mixed methods, prescribing homeopathic remedies as they would any drug, and it may be that Dr. Howard was similarly open to potential remedies.

Howard received his initial certification to practice medicine in Texas in 1899, having not attended a medical college but presumably having studied and served an apprenticeship for a number of years. (CLIMH x) This was before the state of Texas set up separate medical examination boards for regular, homeopathic, and eclectic physicians. To strengthen his credentials, Howard took a correspondence course from Gate City College of Medicine in Texarkana, TX – which, although later not recognized by the state board, was listed as a “regular” medical school, not homeopathic or eclectic – and continued to take other courses to expand his medical education throughout his life. (Patterson’s College and School Directory of the United States and Canada 1909, Vol. 5-7, 386; CLIMH xi) 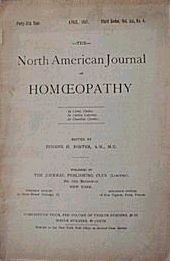 We can only speculate as to why Dr. Howard subscribed to this journal, but evidently he felt it of some value, or else honestly sought counsel on treatment for a patient that suffered from pellagra and was willing to keep an open mind on different courses of treatment, since those at his disposal were not working.