The story of how H. P. Lovecraft and Robert E. Howard came to write to one another has been told many times. It is in essence a very simple story, and the bare facts could scarce fill a paragraph. Yet there is more to the story than is generally recounted, and it may benefit even those long familiar with it to go over it again.

In August-September 1923, H. P. Lovecraft was in Providence, writing “The Rats in the Walls.” Near the end of the story, the narrator Delapore undergoes an atavistic fit, reverting mentally back through his ancestors, his English changing first to older diction, then to Middle English, archaic Latin, then Gaelic, and finally to inhuman vocalizations:

Lovecraft sent the finished story to his friend Frank Belknap Long, responded with several questions and comments, to which the Providence gentleman replied:


What the intermediate jargon is, is perfectly good Celtic—a bit of venomously vituperative phraseology which a certain small boy out to know; because his grandpa, instead of consulting a professor to get a Celtic phrase, found a ready-made one so apt that he lifted it bodily from The Sin-Eater, by Fiona MacLeod, in the volume of Best Psychic Stories which Sonny himself generously sent! I thought you’d note that at once—but youth hath a crowded memory. Anyhow, the only objection to the phrase is that it’s Gaelic instead of Cymric as the south-of-England locale demands. But as—with anthropology—details don’t count. Nobody will ever stop to note the difference. (SL1.258) 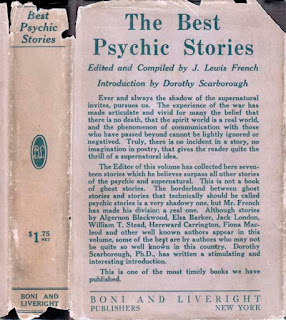 Lovecraft was right; no one did, or at least no one that cared to comment. The Best Psychic Stories (1920) was edited by Joseph Lewis French, with an introduction by Dorothy Scarborough, whose treatise “The Supernatural in English Literature” preceded Lovecraft’s own “Supernatural Horror in Literature.” It contains various favorites of Lovecraft, such as Algernon Blackwood, Edgar Allan Poe, and Lafcadio Hearn, which may be why Long forwarded it to his friend, but it was Macleod’s “The Sin-Eater” which has garnered the most attention, because of Lovecraft’s borrowing. The passage reads:

† Droch caoidh ort! “May a fatal accident happen to you” (lit. “bad moan on you”). Gaoth gun direadh ort! “May you drift to your drowning” (lit. “wind without direction on you”). Dia ad aghaidh, etc., “God against thee and in thy face … and may a death of woe be yours … Evil and sorrow to the and thine!” (Best Psychic Stories 146)

The story was accepted, and published in the March 1924 issue of Weird Tales. Lovecraft—or possibly WT editor Edwin Baird—erred in the quotation, writing aodaun in “Rats” instead of aodann, an error that was continued when the story was reprinted, though it has been corrected in more recent editions edited by S. T. Joshi. Farnsworth Wright, who had succeeded Baird as editor of WT, perhaps inspired by a suggestion in a letter to the editor by H. P. Stiller, reprinted “The Rats in the Walls” in the June 1930 issue. (LE 33) This time, however, someone did notice Lovecraft’s Gaelic gaff, and wrote to Farnsworth Wright about it: a Texan contributor to Weird Tales named Robert E. Howard.


As to the climax, the maunderings of the maddened victim is like a sweep of horror down the eons, dwindling back and back to be finally lost in those grisly mists of world-birth where the mind of man refuses to follow. And I note from the fact that Mr. Lovecraft has his character speaking Gaelic instead of Cymric, in denoting the Age of the Druids, that he holds to Lhuyd’s theory as to the settling of Britain by the Celts. This theory is not generally agreed to, but I scarcely think that it has ever been disproved, and it was upon this that my story “The Lost Race” was based — that the Gaelic tribes preceded the Cymric peoples into Britain, by way of Ireland, and were later driven out by them. Baxter, the highly learned author of Glossario Antiquae Britanniae upholds this theory on the grounds that the Brigantes, supposed to be the first Celtic settlers in Britain, were unacquainted with the “p” sound, which was not used in Britain until the advent of the Brythonic or Cymric peoples. According to this, the Brigantes were a Goidhelic tribe, and Lhuyd’s point seems proven. Personally, I hold to the theory of Cymric precedence, and believe that Brythonic tribes inhabited, not only Britain and Scotland before the coming of the Gaels, but Ireland as well. The blond Britons appear to me to be a closer branch of the ancient Aryan stock, the Gaels arriving later, and being mixed with some Turanian or Mediterranean blood. But every man is entitled to his own view and a writer has the right to use any and all theories, no matter how conflicting, in his stories. I may write a story one day upholding a certain theory of science, letters, anthropology or what-not, and the next day, a story upholding a theory directly opposite. A fiction writer, whose job is to amuse and entertain, should give all theories equal scope and justice. But I’m taking up too much of your time. (CL2.42-43)

Howard’s letters show that in 1929 and early 1930 his reading was turning increasingly to Irish history, with long letters to Harold Preece and Tevis Clyde Smith on Celtic history and language. It was perhaps this focus which made Howard so sensitive to Lovecraft’s use of language in “The Rats in the Walls”—that, and O’Donovan and O’Reilly’s Irish-English Dictionary, which appears to be the source of Howard’s specific argument in his letter to Wright:

We know Howard had this volume, as he cites in a subsequent letter to Lovecraft (CL2.70), and it seems to be the source for some of his Irish language comments in prior letters (cf. CL2.7, 20-21, 22-23). Wright forwarded this letter to Lovecraft (ES 1.268, CL2.xi), who responded to Howard’s query—and while Lovecraft’s first letter to Robert E. Howard does not survive, we do have two accounts of the matter from Lovecraft. The first was in reply to Catherine L. Moore, in a letter dated 2 July 1935:


As for the languages represented in the atavistic passage—I don’t recall including Sanscrit, though I did lift a sentence of Celtic (of which I know not a single word) from another story, The Sin-Eater, by “Fiona Macleod” (William Sharp). This sentence, incidentally, was what brought me into correspondence with Robert E. Howard. It was—since I swiped it from a Scottish story—a Gaelic specimen, whereas of course the Celtic language of southern Britain was Cymric. R.E.H.—as an expert Celtic antiquarian—noticed the discrepancy, and thought I had adopted a minority theory that a Gaelic wave had preceded the coming of the Cymri to Britannia. He wrote Wright on the subject and Wright forwarded the letter to me—whereupon I felt obliged to drop a line to the mighty Conan exposing my own ignorance and confessing to my rather inept borrowing. (SL5.181)

The second, essentially identical account was given in a letter to E. Hoffmann Price dated 5 July 1936—shortly after Howard’s death.


Much as I admired him, I had no correspondence with him till 1930—for I was never a guy to butt in on people. In that year he read the reprint of my Rats in the Walls and instantly spotted the bit of harmless fakery whereby I lifted a Celtic phrae (for use as an atavistic exclamation) from a footnote to an old classic—The Sin-Eater, by Fiona Macleod (William Sharp). He didn’t realise the source of the phrase, but his sharp eye for Celtic antiquities told him it didn’t quite fit—being a Gaelic (not Cymric) expression assigned to a South British locale. I myself don’t know a word of any Celtic tongue, and never fancied anybody could spot the incongruity. Too charitable to suspect me of ignorant appropriation, he came to the conclusion that I followed a now-discredited theory whereby the Gaels were supposed to have preceded the Cymri in England—and wrote Satrap Pharnabazus a long and scholarly letter on the subject. Farny passed this on to me—and I couldn’t rest easy until I had set the author right. Hence I dropped REH a line confessing my ignorance and telling him that I had merely picked a phrase with the right meaning from a note to a Scottish story while perfectly well aware that the language of Celtic South-Britain was really somewhat different. (SL5.277)

From those humble beginnings, Howard and Lovecraft’s correspondence bloomed. No surviving letters between Howard and Lovecraft give any further mention of “The Rats in the Walls” or “The Sin-Eater”—but that is not quite the end of the story, for there is still the matter of Fiona Macleod.

William Sharp (1855-1905) was a Scottish writer, biographer, poet, and editor associated with the Celtic Twilight movement; Fiona Macleod was a feminine alter ego that he had created for the publication of some of his weirder and more fantastic works, including The Sin-Eater and Other Stories (1895), and inspired by a chance encounter with a muse in Italy in 1890, which resulted in his poetry collection Sopsiri di Roma (1891). Macleod’s true identity was carefully concealed during his life, though it emerged after his death, particularly in his wife’s William Sharp (Fiona Macleod): A Memoir (1910).

To most, this revelation was little more than a pseudonym, as Lovecraft would write under the name Lewis Theobald, Jr. or Howard as Patrick Ervin. A closer inspection of Sharp’s life and surviving letters and writings, such as Terry L. Meyer’s The Sexual Tensions of William Sharp (1996), suggests that the identity was an expression of Sharp’s anima, a way to express feminine aspects of his personality, or perhaps non-heteronormative sexual desires, though it is not clear if Sharp ever practiced homosexuality. As Meyer put it: “Sharp had created Fiona Macleod [...] to explore feelings in himself long nascent but long suppressed.” (18) In contemporary times, Sharp might have identified as genderqueer.

It is not clear if Lovecraft was familiar with Macleod’s identity in 1923, when he wrote “The Rats in the Walls,” but by 1929 at least he must have been aware of it, since he wrote to Elizabeth Toldridge:


The lines of William Sharp (who, by the way, has written some remarkable weird material under the pseudonym “Fiona MacLeod”) are highly potent despite their simplicity. I have followed the draining of Lacus Nemorensis with great interest, though without much hope that anything valuable will be discovered on Caligula’s galleys. (LETAR 57)

This is an apparent reference to two separate, though related elements: the draining of Lake Nemi (Lacus Nemorensis in Latin) in Italy by Mussolini’s government, in a bid to recover the sunken Roman galleys, and Sharp’s poem “The Swimmer of Nemi,” written during a trip to Italy and included in his volume Sospiri di Roma (1891), as well as subsequent collections. Probably Toldridge brought it up, in reference to a clipping on the lake draining, or the republication of Sharp’s works, so far it is the only other reference I have found to Sharp or Macleod in Lovecraft’s published letters. Much of Sharp’s work was republished after his death, including the multivolume collections of The Selected Writings of William Sharp (1912), published uniformly with The Collected Works of Fiona Macleod, so there are too many possible sources for Lovecraft’s information to determine what he read, or where and when he read it. It is not apparent that Robert E. Howard read anything of Sharp/Macleod at all. 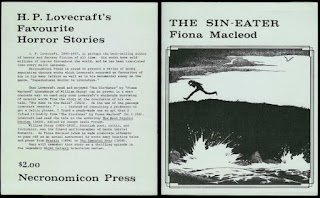 It is a very simple story, and probably familiar to many who are fans or scholars of H. P. Lovecraft and Robert E. Howard—yet for anyone that has pored over their correspondence, it is perhaps exceptional to reflect on the circumstances that brought these two great writers together: a fan-letter, a reprinted short story, an Irish-English dictionary, and a borrowed phrase from a long-dead Scottish writer. Without any one of these elements, Howard and Lovecraft might never have gotten in touch.