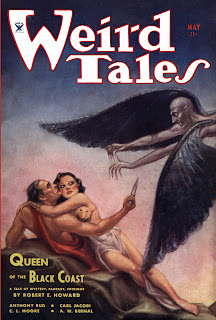 
In an article from1903, J. Dyneley Prince, a professor at Columbia University, published the text of a poem called “The Hymn of Bêlit,” with a phonetic transliteration and a fragmentary translation. He wrote that “this text, which is one of the most difficult of the Sumerian hymns, has, so far as I am aware, never been published before” ( 103). While it can’t be proven that Howard had access to this specific information, the format of the “Hymn” is intriguing, since he prefaced the sections of “Queen of the Black Coast” with verses of a poem called “the Song of Bêlit.”

Stylistically, the two poems could hardly be more different. Nonetheless, the image of a woman who is both intensely warlike (to quote the Hymn, “the city which I plunder is not restored … From the rush of my onslaught who can flee?”), but also associated with love and sex, fits both characters, the mythological goddess and the fictional woman who declared “I am a queen by fire and steel and slaughter” (Howard 243).

In his commentary, Price says “At first sight the subject matter … would seem to indicate that the goddess Bêlit … was a bi-sexual deity,” but he determines that “our goddess is simply claiming universality” (106).

Relating to the connection of Bêlit with similar goddesses, he says that “a great deal of the confusion with regard to Bêlit no doubt arose from the fact that beltu meant ‘lady,’ and hence was applicable to any goddess. By far the most curious part of our inscription are the passages describing the destructive power of Bêlit. She is evidently at war with and conquers other gods ‘of the mountain’ … the whole tone of the hymn is that of a song of praise to a warrior goddess” (107)

It can’t be too curious, however, since he also says that the “Istar in the Gilgamesh-Epic … is a raging deity who smites her foes with plagues. The destructive characteristics of our Bêlit … are precisely those of the Gilgamesh epic. Istar was, of course, the mother of all mankind and the goddess of sexual love and parturition” (108)

He continues drily: “the confusion of the original Babylonian Bêlit with Istar is well known and need excite little remark.”

The Hymn to Bêlit
Paraphrased by Karen Joan Kohoutek

When I stir up the waters, they never clear.
When I kindle a fire, it never goes out.
The House of Heaven, the House of Earth,
are both entrusted to my hand.
The city I plunder will not be restored.
I speak my exalted command, and it destroys the land of my foe.
I am supreme.
In the midst of the mountain,
Where the gods are hostile,
I shout my war-cry.
On the road of the mountain, the gods approach me, and attack.
The gods, who live in their palaces, afflict me.
They rush down to me with one accord.
I am supreme.
The rebellious goddess of the water shouts at me.
I will make the rebellious goddess enter the house.
I lift my hands up to heaven, where I make war with my powers.

I am lead, lead alloyed with copper.
The lofty one, the glowing, one, I am.
I am the maker, I am the goddess.
I disturb the girl, and I disturb the man.
The house that I enter, is the house of the man I disturb.
I go in front, and behind.
Right to left, left to right.
The man unto the woman,
The woman unto the man.
I am supreme.
I tell the mother when she will give birth.

What I have planned will come to pass.

Ragozin, Zénaïde A. The Story of Assyria: From the Rise of the Empire to the Fall of Nineveh (continued from "the Story of Chaldea."). New York & London: G.P. Putnam's Sons, 1887.

That poem is really something. I love it. Its tone sounds truly ancient.

Thanks so much! This text was a real find, for its content as much as its value to Howard studies. And surprisingly badass.