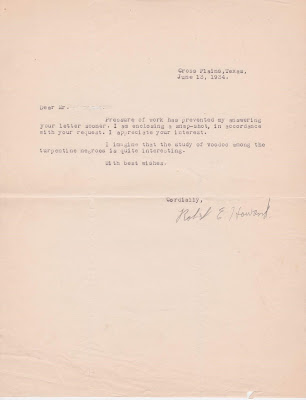 William Seabrook was a notable writer; works like The Magic Island (1929) concerning Haitian vodou, which Lovecraft read while visiting Henry S. Whitehead in Florida in 1931, helped popularize voodoo in the United States (and among the readers of Weird Tales); Robert E. Howard also referred to Seabrook in his letters (CL 3.444). The Gullah (also Geechee, etc.) are distinct African-American communities in South Carolina and Georgia who speak a creole language and have a creole culture.


Barlow’s friend is unidentified in the surviving letters, nor is there a specific mention of turpentine camps; the correlation of reference to snap-shots and study of voodoo in 1933 could be coincidental—as could the location of the note among a parcel of typescripts probably once owned by Barlow. Still, it is not unreasonable to conjecture that Barlow might have encouraged his friend to write to Robert E. Howard asking for a snapshot, and to share his experiences with the Texas pulpster.

Whether there was any more to this correspondence is unknown; there are no references to turpentine camps in Howard’s other correspondence, and references to voodoo are few and do not appear to be related. Likewise, we have no evidence of any direct influence on Howard’s life or writing—thought it is perhaps notable that in late 1934 Howard wrote “Pigeons from Hell,” his story which most prominently features voodoo, including reference to Damballah and zombies.

Sold on eBay in early 2019, this note is brief but interesting. While the last digit of the year is undiscernable, Lovecraft gives his address on the back of the envelope as 66 College St., where he moved in May 1933 (OFF 61-63), setting one boundary; the other is a little tricky, as there is no reference to this note in the published correspondence of Lovecraft to R. H. Barlow, Donald Wandrei, or Bernard Austin Dwyer.

However, we do know that the contents were presumably sent in early or mid January, and included two unpublished works—Robert E. Howard’s “The God in the Bowl” presumably being one of them, since it was not being published during the Texan’s lifetime. Lovecraft acknowledged receipt of C. L. Moore’s unpublished typescript for “Werewoman” in a letter dated 2 January 1936, so it is possible that he included Howard’s typescript or manuscript at the same time, though Lovecraft failed to mention this. (OFF 313) In a letter dated 29 Jan 1936, Lovecraft mentions both visiting with Donald Wandrei over the holiday and had heard from Dwyer. (OFF 314, 316) This note, postmarked the day after, could be a brief follow-up to that letter.

At the time, Barlow was compiling material for his amateur publication The Dragon-Fly, the second (and final) issue of which was published May 1936; a few years later Barlow would publish “Werewoman” in the second issue of another amateur magazine, Leaves (Winter 1938). “The God in the Bowl” was written by Robert E. Howard in 1932 and rejected by Weird Tales (CL 2.315n196, 329n209), just the kind of material that Barlow was looking for (and perhaps the reason Barlow sent Howard a copy of The Dragon-Fly in winter 1935, CL 3.417). Howard allowing a fan to have an unpublished and rejected story was not out of character: he had done the exact same thing when he allowed Charles D. Hornig to have “Gods of the North”/“The Frost-Giant’s Daughter” for The Fantasy Fan in 1934—and Barlow as a subscriber to TFF would have known that.

Whether Howard had lent Barlow the typescript for this purpose or simply for his collection as with the previous typescripts that Barlow had solicited from Howard is unclear, as there is no mention of it in the surviving correspondence. Ultimately the story was not published by Barlow. No surviving draft or typescript for “The God in the Bowl” is known to have been associated with Barlow either, which raises the possibility that an unknown draft of “The God in the Bowl” might exist or have existed at some point—imagine a version of the story starring Amra of Akbitania, following the same convention of renaming Conan as in “Gods of the North!”

This brief note is the only reference that shows Barlow or Lovecraft were aware of or had read “The God in the Bowl”—a very untypical Conan story, to say the least, whose reference to law, justice, and police work echoes Lovecraft and Howard’s correspondence on those subjects in the early 1930s. If the typescript had been sent to Barlow some period of time after the teenager’s initial correspondence with Howard in 1933, in response to a solicitation for unpublished material, it might explain why there is no reference to it in Howard’s earlier letters.

Both letters are ultimately ciphers: there is more to conjecture about than any hard facts to go by, other than the apparently indisputable facts that Howard received a letter from someone who claimed to have witnessed voodoo at a turpentine camp, and that Lovecraft had received “The God in the Bowl” from Barlow and apparently read it.
__________________________________
Works Cited
CL    The Collected Letters of Robert E. Howard
OFF   O Fortunate Floridian! 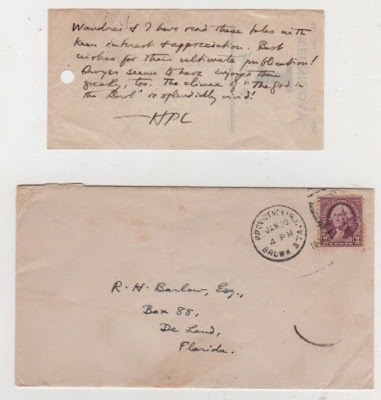 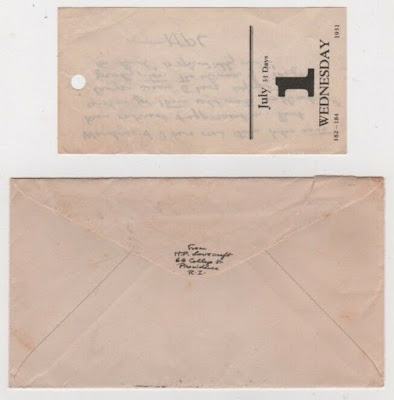