I had what I would consider an odd encounter with another Robert E. Howard fan today. I took my typical Wednesday trip to the comic book store to buy two comics - East of West issue #9 and Conan and the People of the Black Circle #4. 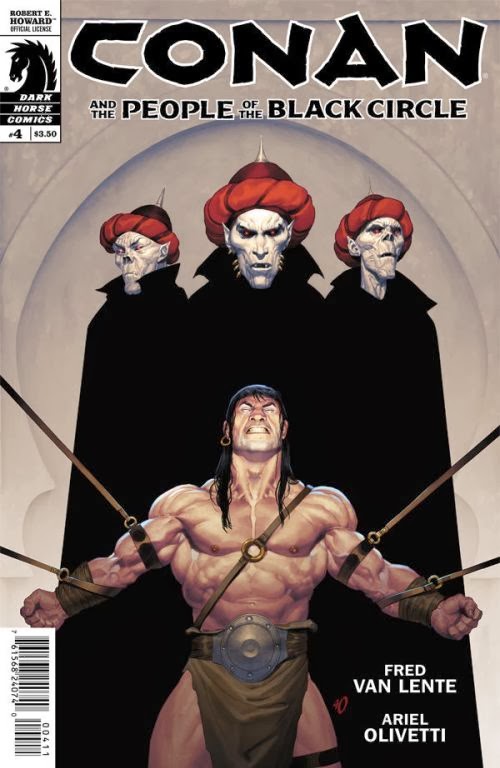 When I took the two books to the counter, the guy at the register asked me if I was enjoying the Conan series. I told him I had not had time to read them yet, but was not holding my breath. He gave me a strange look and asked if I was a Howard fan. I nodded and asked, "You?" He said, "Yes, huge fan."

Huge fan, I thought to myself. Hmm. He told me he liked this series but was waiting to read Howard's story The Hour of the Dragon before reading Tim Truman's comic book series titled the same. I told him that was a good idea (even though Truman does his best to stick with Howard's storyline), but make sure you read the story from the Del Rey book. He nodded and said, "The Del Rey's are the original manuscripts, right?"

I told him they were, and that those were the best editions to buy. He then asked me if I had ever been to Howard Day's in Cross Plains. I told him I had gone the last two years and intended to go again this year. He said he had friends who attended a lot, rattled off a couple of names I had never heard (which doesn't mean anything) and then told me he was from Brownwood. I explained I was from Abilene.Small world.

This led to a discussion about the Howard home and he detailed his story about seeing it for the first time. I told him the first time I saw Howard's home someone was living in it. I don't think he understood the time frame or weight of that claim. During this brief conversation, he brought up the new Conan movie (now in pre-production) starring Arnold Schwarzenegger. I cringed inside and did not voice an opinion, until he said he really enjoyed the first two Conan movies with Arnold. I shook my head and told him I did not care for them. He told me he thought the wizard in the first film made the movie great, then preceded to quote a line the wizard has said from the film. I tried to explain to him that I thought those movies were good Sword & Sorcery films for their day, but they were certainly not REH's true character. I told him I thought L.Sprague de Camp was too heavy an influence on the filmmakers. That comment was pejorative, I'm just not certain he understood that.

He told me he was introduced to Conan through de Camp's Conan series. I told him I was too. However, I then preceded to explain how I realized that de Camp did a wonderful job introducing reader's to Conan but a terrible job introducing readers to Conan's creator. He gave me an odd look (I think he was attempting to process what I sad), then he piped up and said, "de Camp's introductions in those books were wonderful." He then made the most ignorant anachronistic statement I have ever heard, "Howard even gave his approval of those introductions by de Camp." 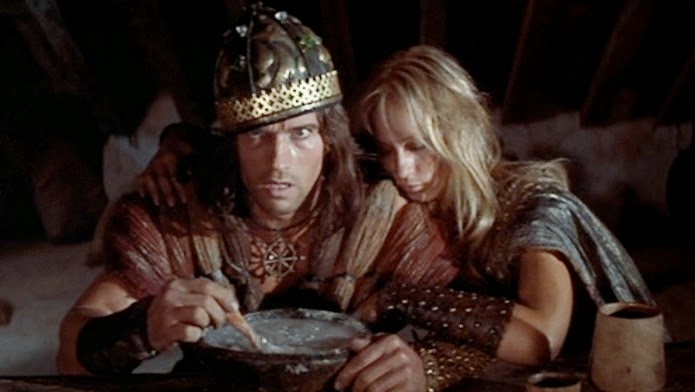 I was so taken aback by the comment it tied me up for a few seconds in stunned silence. "That would be impossible," I replied, "since Howard had died decades before de Camp ever wrote those introductions." The guy's face went pale green. To avoid any further embarrassment I said, "The problem I have with de Camp's introductions is their futile attempt to psychoanalyze Howard. I have a real problem with those introductions in that they gave the reader the wrong impression of just who Howard actually was." He looked a little winded at this point but I continued. "I honestly think de Camp did far more damage to Robert E. Howard than he ever did to Howard's characters, though he certainly did not help there much either, unless you consider the amount of people who came to Howard's characters, especially Conan, through that de Camp series." I continued, "Outside of this, I really don't think de Camp was amicable to Howard's real history. However, I am glad you are aware of the Del Rey books - read those introductions and stories and you'll get the real Robert E. Howard, history and works." He nodded.

Now while I think this guy truly is a fan of Howard and his character Conan, it does pain me to see a fan that misinformed. I told him he ought to go to Howard Days and hear for himself a few purist Howard scholars and fans. However, I'm afraid by the look on his face after our discussion, Howard days might short circuit him. I'm rather mild compared to some of the other Howard fans and some of the Howard scholars out there.