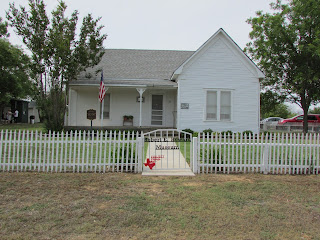 At Friday night's REH Days auction and dinner I fought hard for several items. Most of the items I bid on were won by deeper pockets than mine. And I actually mourned the loss of a few of those items. Nonetheless, I did manage to walk away from the auction with these . . . 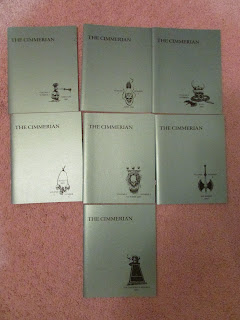 A collection of Leo Grin's The Cimmerian. The set I won was from 2005 (an early set); Vol 2. Nos. 1-6 plus the Cimmerian awards issue for 2005. If you're not familiar with Grin's Cimmerian scholarly fanzine then let me explain why I am so excited about getting these issues. First, Leo Grin is a first rate Howard Head. His blog, The Cimmerian, which ended it's tenure on June 11th, 2010 was one of the best REH blogs on the internet. I was sad to see it end. If you have never seen the blog, then let me be the first to tell you that spending an entire day perusing it's contents is a day well spent. Second, The Cimmerian booklets contain some of the best earlier secondary writings from Howard scholars and fans (e.g. Rob Roehm, Gary Romeo, Steven Tompkins, Don Herron, Rusty Burke, Chris Gruber, Mark Finn, Leo Grin, Charles Hoffman, Bill Cavalier, etc.), along with excellent pictures, illustrations, poetry, prose, and maps. The books themselves are bound and printed on first rate paper along with excellent typeset. They are a fine addition to any Howard fan's collection. So, despite the fact that I lost other items, these did a fine job of making up for those losses. I'm very pleased to add these to my Howard collection. 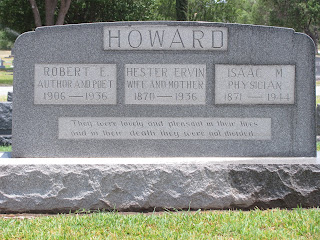 Today marks the 77th anniversary of the death of Robert E. Howard.

I raise my glass to REH a wonderful writer of prose and poetry. Cheers! 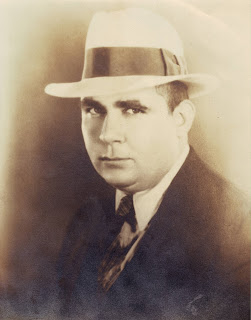 My second year at REH Days in Cross Plains, Texas was, I think, better than last year's event. Tim Truman was the guest of honor. While all the panels were good, I enjoyed the ones with Tim the best (esp. REH in the Comics).

I've been a fan of Truman's work for some time now, especially his art work on Grim Jack. I also had several opportunities to chat with him about various influential authors. Aside from Robert E. Howard, I discovered that Samuel R. Delaney and George R.R. Martin were two other authors Tim told me had a pretty big influence on his work over the years. We discussed Samuel R. Delaney at some length. I had read Delaney's work titled Dhalgren back around 1978/79. I loved that particular work. Tim recommended The Einstein Intersection; a book I own but have not read. I have since picked it up and begun reading it.

Joe R. Lansdale was a surprise visitor to this year's REH Days. He declared he was there because of his old friend Tim Truman. I am only familiar with some of Lansdale's comic book work—I've never actually read any of his novels/fiction. It was interesting to hear his various views—he has a lot of them—on Robert E. Howard and other authors, comic books, etc.

Overall, I thoroughly enjoyed the weekend. I met a few new people, made a few new friends, saw some people I knew from last year's event, ate some great food, and listened to some excellent discussions. Below are some pictures I took while there. If you've never been to REH Days in Cross Plains, you should attend next year; especially if you are a Howard fan. It is well worth the time and money spent. 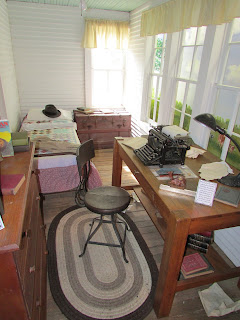 Above is Robert E. Howard's bedroom and work space. 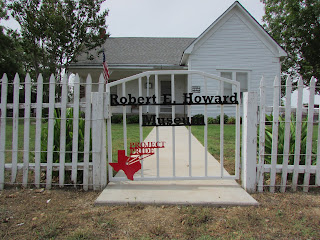 A front view of the REH Home and Museum 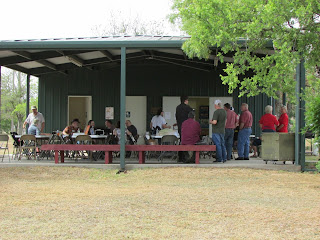 The pavilion next to the REH House and Museum 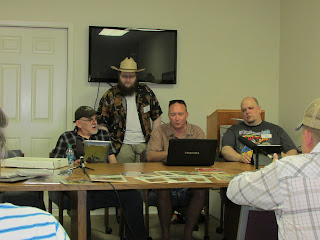 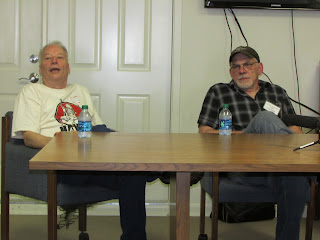 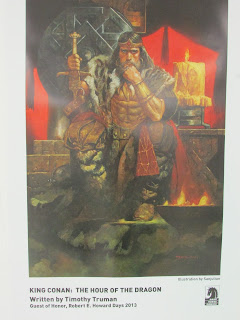 A Dark Horse Comics promotional poster that was up for auction at the Celebration Dinner & Silent Auction Friday evening June 7th. 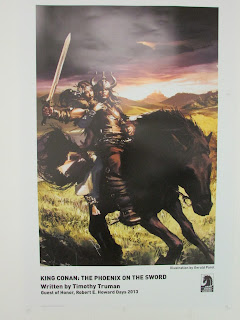 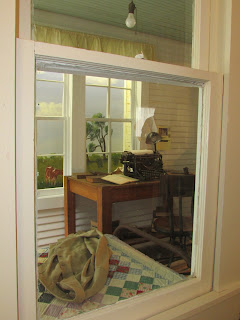 Inside the Howard home. 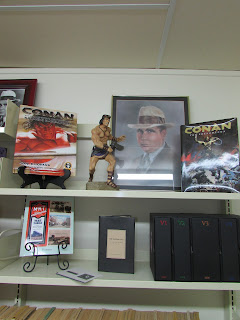 Inside the Cross Plains Public Library. 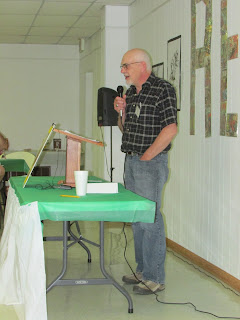 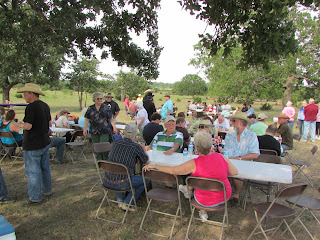 The sunset BBQ at the Caddo Peak Ranch.

REHupa recently announce the guest of honor at the 2013 REH Days in Cross Plains, TX.

Timothy Truman, best known for his work on Grimjack with John Ostrander. In 2006 Tim Truman took over the writing from Kurt Busiek on Dark Horse Comics Conan series.

Here are two of the graphic novel formatted Conan series I have in my personal collection that Tim Truman worked on . . . 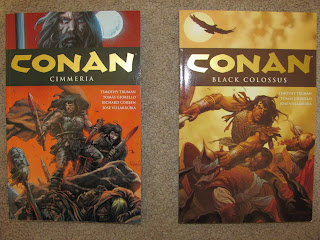 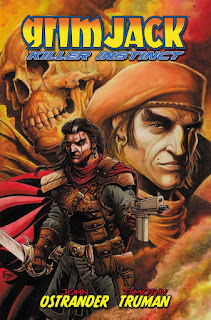 He was also a writer on the Star Wars series published by Dark Horse. Here is an image of the omnibus from that series . . . 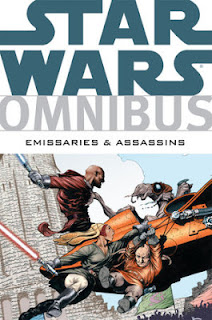 I'm looking forward to meeting him and getting him to sign a few items.

Here are a few items I'm about to begin reading over the next few weeks: While I have owned this book for several years now, this will be my first stab at getting around to reading it. I'm looking forward to these stories. I've heard nothing but good things about them, so it's now time to read them. 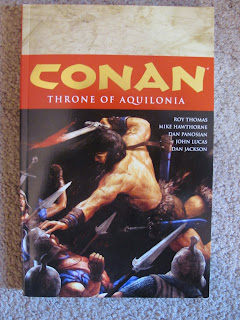 The above is volume 12 in the Dark Horse Conan series. I'm excited about reading this because Roy Thomas (of Marvel Comics fame; the original Conan comic book writer) is the writer on this graphic novel. 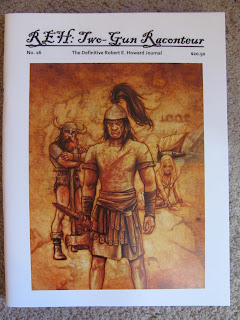 Pictured above is the latest REH: Two-Gun Raconteur journal. This journal has an original work by REH (The Diablos Trail). The issue is dedicated to Glenn Lord and the cover art is Cormac Mac Art and Wulfhere by Terry Pavlet. The journal contains articles by Jeffrey Shanks, Michael L. Peters, Rob Roehm, and there is some verse by Barbara Barrett.

Looks like I've got a load of fun reading planned for the near future. I'm chomping at the bit to get started. Cheers!

Robert E. Howard in a letter to HP Lovecraft

“My tastes are simple; I am neither erudite nor sophisticated. I prefer jazz to classical music, musical burlesque to Greek tragedy, A.Conan Doyle to Balzac, Bob Service to Santayana, a prize fight to a lecture on art. I read the pulp magazines and enjoy them. I laugh uproariously at slap stick comedy in the movies. I respect men’s religion whether I believe in it or not.”

Today is Robert E. Howard's 107th birthday(January 22, 1906 – June 11, 1936). I'm not going to delineate a short biography, that has been done countless times. This is a post simply to tip my hat to the greatest pulp writer ever. In fact, here's to one of the greatest writers to ever sit at a typewriter (or take up pen) and write. Happy birthday REH!

I have not given up on this blog, though that seems to be the case. Life has merely happened and I've allowed certain "things" to dictate my time. With this month marking a new year, and me wanting to put forth new efforts, and Robert E. Howard's birthday being this month, I am hoping to mark off time to place greater effort on this blog. So, be looking for upcoming posts. Cheers!