Over the last 4 or 5 months I have collected a few new REH items of interest. 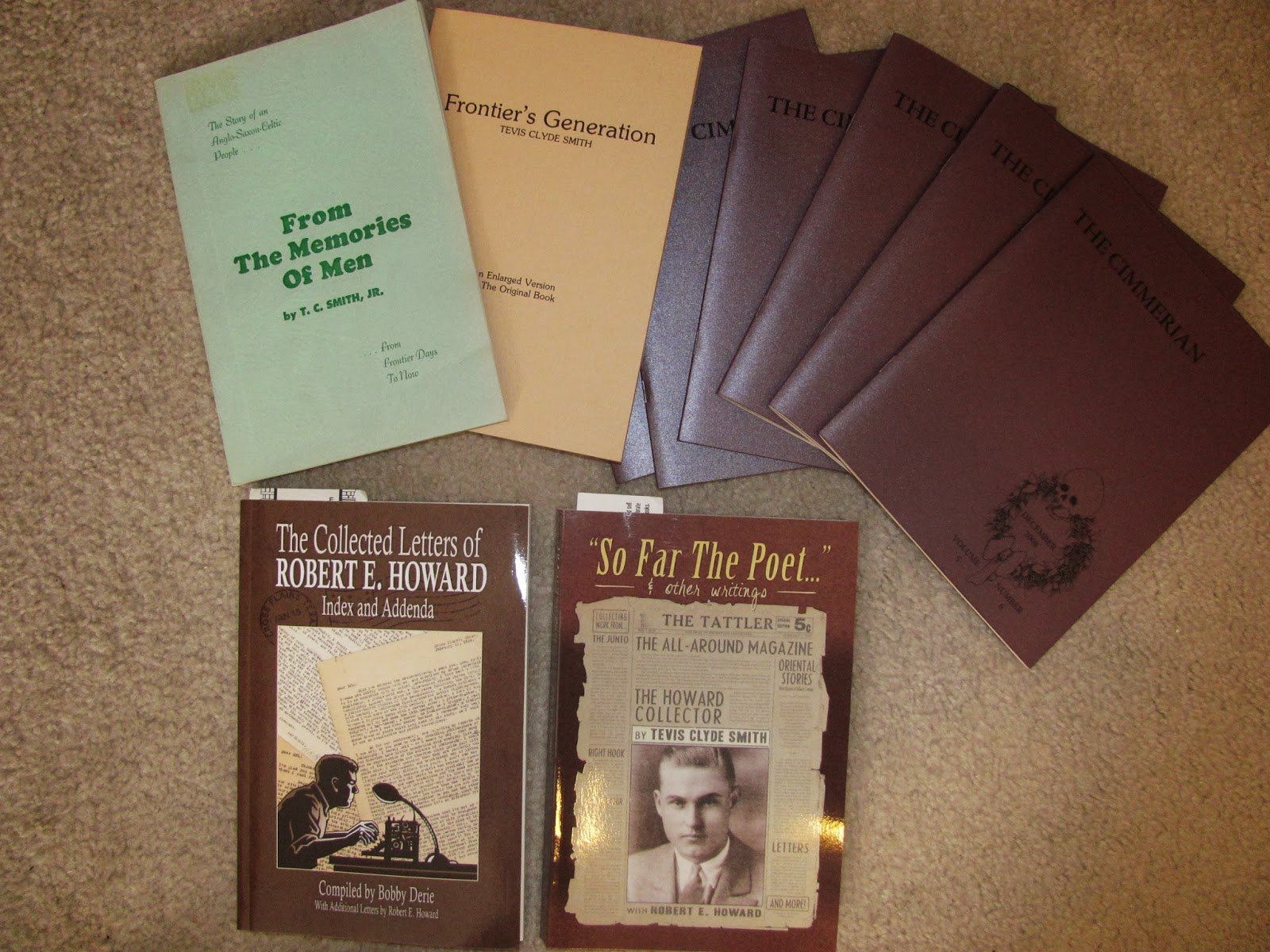 From the Memories of Men by Tevis Clyde Smith (autographed)
This book is a self-published book from Smith, the book is about Brown and other Central Texas Counties, from the frontier days to the time of publication.. It also deals a bit with the Anglo-Saxon-Celtic people who built that part of the country (according to Smith).

Frontier's Generation by Tevis Clyde Smith. This book is, as the subtitle suggests, The Pioneer History of Brown County with Sidelights on the Surrounding Territory. There is a nice section in the back devoted solely to Robert E. Howard. This work is a very detailed history of the Brown County area with some excellent pictures.

The Cimmerian Vol. 5 Nos. 1-6
It's unfortunate that this journal is no longer being published. There are some great articles/essays from both Howard fans and scholars alike.

The Collected Letters of Robert E. Howard: Index and Addenda edited by Bobbie Derie. If you own the Three Volume set of the Collected Letters of Robert E. Howard, then you will not want to be without this added volume. It is a fairly exhaustive subject index to those letters with new letters added. This book was a godsend for my research in the collected letters. It certainly made finding things way easier!

So Far the Poet & Other Writings By Tevis Clyde Smith (edited by Rob Roehm) According to the REH Foundation, "This collection contains all of the known pieces that Smith wrote about Howard, contributed to Howard fan publications, or co-authored with Howard. It also contains many of the pieces Smith wrote while Howard was still alive, items from The Tattler, Daniel Baker Collegian, The Junto, Dallas Morning News (one including a reference to Howard), contributions to Truett Vinson’s Lone Scout publication, The Toreador, and the few surviving letters from Smith to Howard, several presented here for the first time. Snippets from Howard’s correspondence and quotes from Post Oaks and Sand Roughs, Howard’s semi-autobiographical novel,are provided to give context."

Most of these items were purchased over the last 5 or 6 months of research I've been doing for an upcoming article for REHupa. All these items are well worth tracking down if you are a Robert E. Howard reader or fan.

Here's a very interesting article on Jim and Ruth Keegan's blog about a trip that Robert E. Howard and Truett Vinson took to Lincoln, NM. If you read their article you'll see that it pivot's around their recreating that trip in their The Adventures of Two-Gun Bob. Stone markers were never mentioned in Robert E. Howard's accounts of that visit. If you're interested in reading REH's account there are two places you can currently read it: The Collected Letters of Robert E. Howard and/or A Means to Freedom: The Letters of H.P. Lovecraft and Robert E. Howard.

The account is relayed by Robert E. Howard to H.P. Lovecraft. I'll be discussing that account in some detail in an upcoming article I'm writing for REHupa.

On that trip Howard mailed a postcard of the famous Billy the Kid picture to August Derleth and wrote on the postcard: "This card was purchased in Lincoln, N.M. from a descendant of a participant in the Bloody Lincoln County War."

Robert and Truett pretty much walked the entire area of the twon of Lincoln, NM. Had those stones from the Keegan article been there, I'm quite convinced Howard would have mentioned them in his correspondence.

Anyway, if you have the time, click on the link above and read the Keegan article. It's quite fascinating. 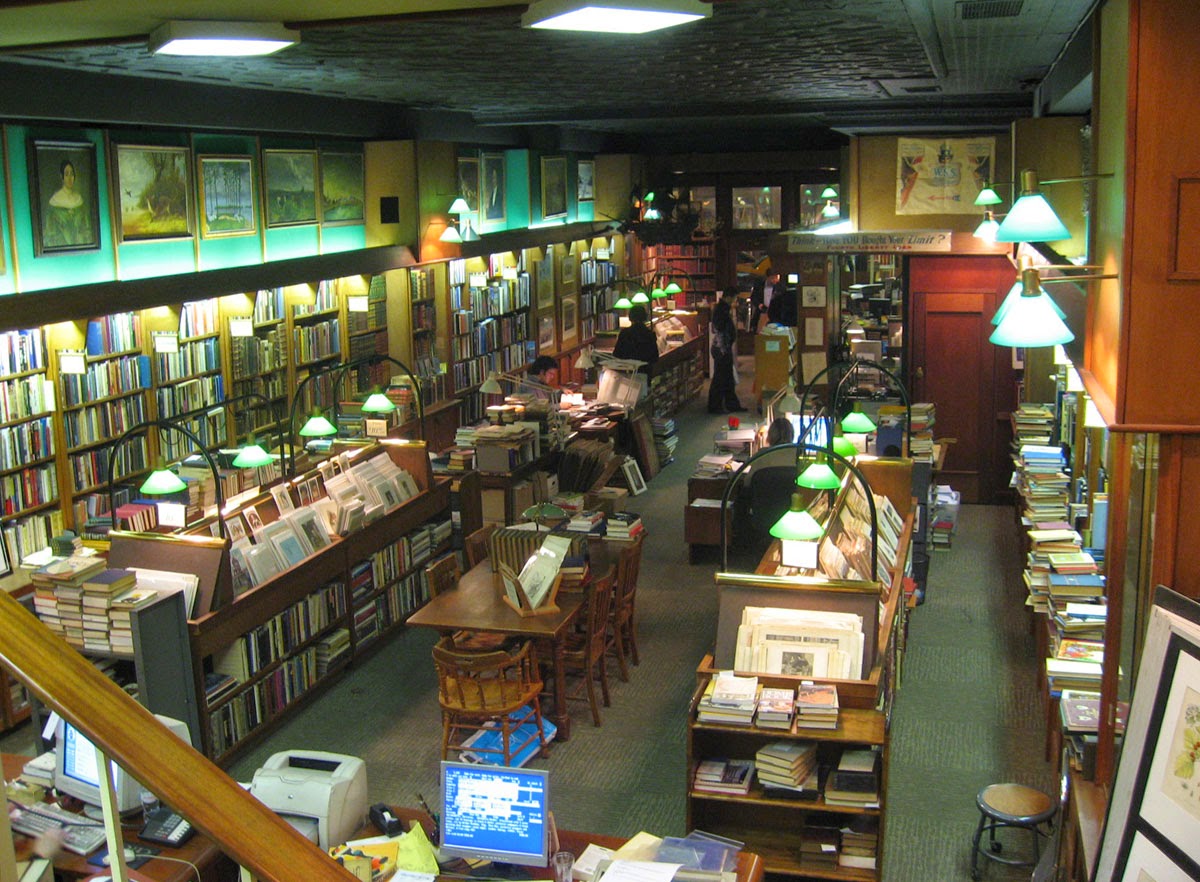 For the last three months I've been doing a tremendous amount of research on Billy the Kid and Robert E. Howard. Some of this research involves where REH possibly obtained a particular book. While pouring through the The Collected Letters of Robert E. Howard, I discovered that REH would frequently order books from a bookstore in New York City called Argosy. (Pictured above)

As it turns out, that bookstore is still in business today. According to a brief history from their website,

"Argosy Book Store, founded in 1925, is now in its third generation of family ownership. Our enormous stock of antiquarian and out-of-print items fills a six-floor building in midtown Manhattan and a large warehouse in Brooklyn. We specialize in Americana, modern first editions, autographs, art, antique maps & prints, and the history of science & medicine. We also have thousands of books in all other fields of interest. We are founding members of the Antiquarian Booksellers Association of America, and we belong to the International League of Antiquarian Booksellers and the Appraisers Association of America."

My guess is that REH began ordering from their catalog around mid to late 1928, or early 1929. Howard mentions the bookstore in a letter to his friend Tevis Clyde Smith. In the letter Howard is a bit disgruntled at Argosy for not sending him their latest catalog. He talks about them as if he has been doing regular business with them for some time.


"I don't suppose you've seen anything of the Junto. I haven't. The Argosy pipple [sic - intentional as REH is playfully joking through this entire letter] enrage me highly by their damned discriminating attitude. I haven't gotten their latest catalogue no more as nothing. They always send their other customers theirs before they send me one." (The Collected Letters, Vol. 2, 30)

This weekend kicks off World Book Day, which technically begins today and lasts until March 6th, I thought it quite appropriate to mention Argosy, an independent bookstore that has survived for over 90 years, and other independent bookstores across the U.S. and in the world. Considering that Howard was located in the middle of "nowhere, TX" having access to a New York bookstore through mail order was huge in his day.

It's nice to know that there is a bookstore that Robert E. Howard shopped at via snail mail that still exists today. 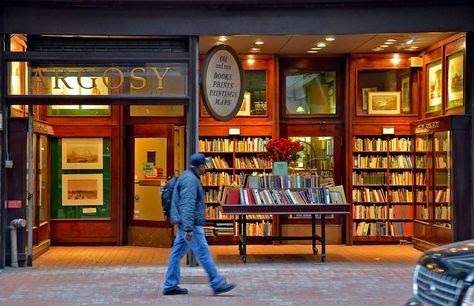