Conan and the Dweller Part 4: Some Notes on William Lumley by Daniel Harms, Michael Lesner, and Bobby Derie

Despite his role in lives of H. P. Lovecraft, Clark Ashton Smith, and Robert E. Howard, we know less about Lumley than most others of Lovecraft’s circle.  Six letters in Lovecraft’s Selected Letters were written to him (SL 3.372-3, 450; 5.207, 213-4, 273, 420), but none of them truly reveal anything other than that he was interested in occultism, mythology, and Lovecraft’s dreams; a bit more is revealed in scattered references from the letters Lovecraft, Howard, and Smith discussing their correspondence with Lumley, or the appearance of his work in print.

William Lumley’s most notable work is the short story “The Diary of Alonzo Typer,” as revised by H. P. Lovecraft and finally published in Weird Tales (Feb 1938). Lumley’s original draft, published in Crypt of Cthulhu #10 (1982) and reprinted in Price’s Black Forbidden Things and Medusa’s Coil and Others, has its interesting moments, but it consists mainly of an undated, rambling set of entries. No information was given for the author or the diary, save that it was “found after his mysterious disappearance.” The piece has no clear purpose or conclusion, and the only virtue is that this brings it a touch of authenticity.

Lovecraft did a considerable amount of work on the manuscript. He wrote the introduction setting the scene in Lumley’s New York state near Buffalo, describing the village of Chorazin and the history of the van der Heyl family, provided a chronological framework for most of the work, and introduced the idea of Typer being a relative of the van der Heyl family. This, of course, was in addition to dropping the names of a few Mythos tomes. Oddly enough, the insertions of Theosophical lore (the city of Shamballah, the Book of Dzyan) are Lovecraft’s. 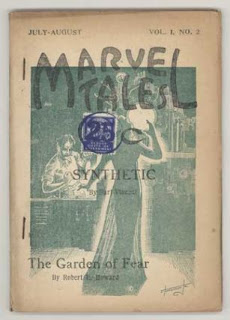 Lovecraft’s finances were already running out, but as he considered this collaboration philanthropy (OFF 299), he accepted only a copy of E. A. Wallis Budge’s Egyptian Book of the Dead as payment for the revision (SL 5.208). Lovecraft supposed the story would land with William Crawford at Marvel Tales, but instead Lumley sent it to Weird Tales. (ES 2.711-2) When Farnsworth Wright accepted the story and inquired as to why it sounded so similar to Lovecraft, Lumley revealed to the editor that Lovecraft had revised many pieces that had appeared in the magazine under the names of others (SL 5.207). Despite this acceptance, Wright held on to the story for over two years.

In his letters, Lovecraft gives little biographical data on his correspondent. Lumley is described regularly as “old,” and while described as living in Buffalo, New York in 1931 (ES 1.339), the only full address given is in 1933, which Lovecraft lists as 742 William St. (LRBO 55) L. Sprague de Camp quotes a letter from Lovecraft to Robert Bloch stating that Lumley:

who claims to be an old sailor who has witnessed incredible wonders in all parts of the world, & to have studied works of Elder Wisdom far stronger than your Cultes des Goules or my Necronomicon. (HPL 407)

However, de Cramp but provides no source, and the quote does not appear in any of Lovecraft’s published correspondence. Yet, the possibility that Lumley may have been a seaman is valid, for in another letter Lovecraft says that Lumley: “has been at sea & seen odd parts of the earth[.]” (LFO 153)

Lumley was a common name in Buffalo in the early-mid 1930s, and four or five William Lumleys can be found in the city directories for the period, but only one lived at 742 William Street. The directories list a William Lumley who had lived in this building for a few years (having moved there from 450 Niagara Drive). The building in question stood at the corner of William and Smith Streets in Buffalo, but has since been demolished. It appears to have been a business and attached carriage house, the second floor of which was let out to lodgers. When Mr. Harms visited the site around 2000, the building was abandoned. A paint store had been the last occupant of the storefront on William St. The bulk of the structure, extending down Smith Street from the intersection, was painted deep green and had a decided tilt to one side.

Lumley dropped in and out of the city directory over the years.  He never appeared again after he left 742 William St. The only other information given was an entry that he worked as a “watchman” at an unspecified business.

A systematic search of the cemeteries in Buffalo found one record of a “William Lumley” in the French and German Cemetery, and a search of the plots turned up Lumley’s unmarked grave.  The cemetery records stated that Mr. Lumley was born on March 20, 1880, and died on May 31, 1960 of coronary sclerosis.  His death occurred in Alden, New York (a town to the east of Buffalo where the Erie County Home and Infirmary is based), and welfare paid for his burial expenses.  The dates appeared to be right – Lovecraft implied that Lumley as an older man – but it was difficult to say whether this was the Lumley who lived at 742 William St.

In “The Diary of Alonzo Typer,” Alden, New York, south of Attica, is Typer’s last stop in civilized areas before walking to the town of Chorazin. If Lumley’s character followed the actual geography, it is likely that Typer would have walked to the van der Heyl mansion in this direction, as the landscape is much hillier than that elsewhere in the area. The region’s legends include mentions of Native American mounds in this area, as well as at least one mysterious stone structure, most likely the remnants of a former house, which could have provided some inspiration for Lumley’s handwritten draft. Still, no town named Chorazin exists in the area, and no one ever built a house in this region that has dates near those of the van der Heyl mansion: these were elements that came from Lovecraft’s imagination.

In the Alden Town Clerk’s Office is the death certificate for the Lumley buried in the French and German Cemetery, who was listed as a watchman for the American Agrico Chemical Company.  Because of the profession and name, we can be fairly certain that this Lumley was our man.  The certificate noted that William Lumley was born to Edward Lumley and Isabel Johnson in New York City, and that he was single. His last address in Buffalo was 8 Park Street (within a few miles of the two addresses already mentioned), but in 1958 he was moved to the Erie County Home and Infirmary in Alden, where he passed away two years later. Any records at that institution would have been destroyed in a fire, according to a clerk there.

This is where the trail went cold. While we now know Lumley’s whereabouts for the end of his eighty-year life, the man himself remains an enigma. Did he stay in Buffalo all of his life, or did he move about the country in search of work before returning home? Were his trips to China and India that Lovecraft mentioned products of Lumley’s (or Lovecraft’s) imagination, or did they really occur? 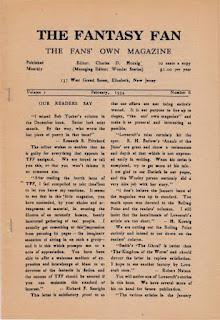 Writing the John Hay Library, we discovered that a few letters by Lumley – totaling six pages – had been preserved. Lumley’s letters, for the most part, discuss his favorite tales in the pulp magazines and fan journals. In addition to Lovecraft, his two main correspondents seem to have been Smith and C. L. Moore, both of whom encouraged him in his fiction. Lumley submitted many pieces of fiction, including the titles “The Phantasy” and “Dread Words,” to Marvel Tales and other magazines, apparently to no avail. He and Lovecraft shared a love of cats, and one of Lumley’s letters discusses the worship of Bast at some length. Those looking for more clues as to Lumley’s past are given only a few items of interest – a brief mention that Lumley had been in Port Said in Egypt, and that he had once owned a black panther from Sumatra who had been given to a circus. (The most likely candidate, the Ringling Brothers Barnum and Bailey Circus, has no record of any such transaction.)

At this point, our research into Lumley’s life has to be put on the back burner, yet we hope that someday more investigation into this fascinating figure’s life will be done. What we have now is merely a skeleton.

Robert E. Howard certainly loved San Antonio, Texas. On several occasions he declared it was not only his favorite city in Texas, but boasted that it was probably the greatest city in the country. Back in early 1931, Robert E. Howard and his parents stayed in San Antonio for several months. While there, Howard worked on genealogy research, took in the city, enjoyed a few prize fights, frequented a number of bookstores, and visited a few pubs. Periodically he would write his friend, Tevis Clyde Smith, to give him an account of the goings on in the city.

These letters are some of the most interesting Howard wrote during this small stretch of time. In one of the letters, circa March 1931, he told Smith that George Godfrey was in town for a heavyweight prize fight. That particular evening Godfrey was apparently at one of the local music halls publicly taunting carnival and vaudeville performer, Frank "Cannonball" Richards. Godfrey was a mountainous figure for the time, standing six-three and weighing around 250 lbs of pure muscle.

Godfrey had a reputation, due to his enormous size, of being not only a braggart, but sometimes a pompous wind-bag. On several occasions this got Godfrey in hot water. A prime example, the Langford/Godrefy fights. Sam Langford was dwarfed (standing only five-eight) and substantially out-sized by Godfrey, and because of this Godfrey taunted Langford before their first bout. Langford, a legend in the sport of boxing, didn't much care for the attitude and preceded to hammer Godfrey in their first of three bouts, knocking him out. Godfrey would later win the World Colored Heavyweight Championship twice and would eventually fight heavy weight champion Primo Carnera.

Frank "Cannonball" Richards had spent years traveling with carnivals and vaudeville shows demonstrating his enormous abdominal strength, letting people punch, kick and swing sledgehammers at his belly. He also had a special twelve-foot cannon rigged to shoot a 104 lbs cannonball into his stomach. This feat would toss him back about 6 feet into a safety net. He then would stand up, unscathed, causing the onlooking crowds to burst into applause and awe.

"Well, pretty soon I'm going down to a music hall, I think, and watch the big smoke George Godfrey do his stuff." wrote Howard. Godfrey was challenging onlookers to punch him in the stomach and Howard declared, "they have a 212 pound smoke for the job." Word had apparently got around that Godfrey was not only taunting Richards, but challenging onlookers to punch his stomach. Someone had found a 212 pound man who was up to the challenge, and Howard didn't want to miss the hoopla. In response, Howard writes, "Frank Richards, the man with the iron belly is in town and raging. He says George is trying to steal his stuff and will probably raise some kind of hell at the fights tonight."

There is surviving film footage of Frank Richards performing his feats in various locales which has circulated widely and been used in various television shows and documentaries, it has become somewhat of a pop sensation. The Simpsons even parodied Richards on one of their episodes. Homer Simpson, on a stage in front of thousands of people, humorously performs the exact cannonball stunt Richards did so many decades ago.


It's not known whether Howard went to the music hall, he never writes a follow-up letter to Smith. It is also not known whether Frank Richards showed up at George Godfrey's fight, as Howard had heard that he might. Even so, Howard's letter gives us a nice peek into the pop culture of his time.