Travels with Robert . . . Clarksville, Texas by Todd B. Vick

On my recent road trip to Clarksville, I discovered a few things about my home state’s history that I did not know. 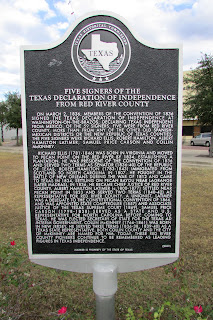 First, five men who signed the Texas Declaration of Independence are from Red River County. These men include, Richard Ellis (1781-1846), moved to Texas from Virginia, owned a plantation on the Red River, and served as a Texas senator. Robert Hamilton (1783-1843), immigrated from Scotland, to North Carolina, moved to Texas in 1834 and eventually became Chief Justice of Red River County.  Albert Hamilton Latimir (1800-1877), settled near Pecan Point in 1833 and served two terms as a representative for Red River County, became the State comptroller, and was an associate justice of the Texas Supreme court. Samuel Price Carson (1798-1838), served as a State and U.S. Representative in North Carolina before moving to Texas, was elected Secretary of State of Texas ad interim government. Collin McKinney (1766-1861), was born in New Jersey, moved to Texas and served three terms as a Texas State Representative, and Collin County and the city of McKinney are named for him.

Second, traveling back home from Clarksville, about 10 miles almost due south of Bagwell, I visited a relatively recent discovered abandoned cemetery in the area. Because of the historical significance of who is buried in this cemetery, the State spent funds to clean up the area, gate the tiny cemetery in and strategically place several historical markers around the cemetery.

This cemetery is the William Becknell/Robbinsville cemetery. William Becknell, known as the “Father of the Santa Fe Trail,” was an American Frontier soldier, trader, farmer, rancher, and politician. Born in Virginia around 1787, he joined Daniel Morgan Boone’s company of U.S. Mounted Rangers and fought under the command of Major Zachary Taylor in the Battle of Credit Island, Iowa in 1814.

After the War, and the death of his wife, Becknell gathered a trading party to accompany him across the Great Plains to Mexico in 1821. He was the first U.S. Trader to arrive in Santa Fe after Mexico won its independence from Spain. He was the first to “open” (or begin) legal international trade in Santa Fe. In 1835, he moved with his new wife and family to Red River County in Texas where he spent the remainder of his life. Shortly after he arrived in Texas, he commanded a militia unit known as the Red River Blues to protect settlers from raiding Native Americans. 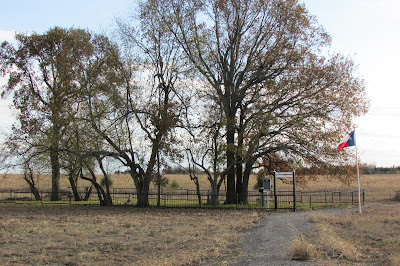