By 2020, nearly every word that Robert E. Howard wrote has been published in some form or another. Collections of his fiction began with Skull-Face and Others (1946, Arkham House), and since then there have been dozens of books published, focused on any number of themes. Any new collection of Robert E. Howard’s fiction must be evaluated against all the others that have come before. Readers want to know if there are any stories or poems they haven’t read, if there is any art or essays that add to the overall value.

This is all the more important now that many of Howard’s original pulp stories have entered the public domain in various parts of the world. Many of his stories are available for free online on Wikisource or Project Gutenberg or the Internet Archive. It has never been easier for any random individual to grab the text of the stories off the internet, compile them in a word processor, and have it published in a professional-looking ebook, paperback, or hardback. 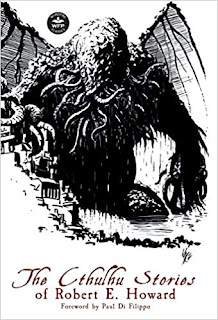 Which is essentially what we have with The Cthulhu Stories of Robert E. Howard. This book collects Howard’s stories “The Shadow Kingdom,” “Skull-Face,” “The Children of the Night,” “The Gods of Bal-Sagoth,” “The Black Stone,” “People of the Dark,” “Worms of the Earth,” “The Thing on the Roof,” “The Haunter of the Ring,” “The Fire of Asshurbanipal,” “Dig Me No Grave,” and the round-robin story “The Challenge From Beyond” written by C. L. Moore, A. Merritt, H. P. Lovecraft, Robert E. Howard, and Frank Belknap Long. All of which works are claimed to be in the public domain.

Is this every Cthulhu Mythos story Robert E. Howard wrote? Strictly speaking, no. Cthulhu: The Mythos and Kindred Horrors (1987, Baen) edited by David Drake includes the 1932 poem “Arkham,” along with various other Howard stories that aren’t directly related to the Mythos. Nameless Cults: The Cthulhu Mythos Fiction of Robert E. Howard (2001, Chaosium) includes “The Little People,” “The Hoofed Thing,” and fragments completed and incomplete such as “The Abbey,” “The Black Bear Bites,” “The House in the Oaks” (completed by August Derleth), “The Door to the World” (completed by Joseph S. Pulver, Sr.), and “Black Eons” (completed by Robert M. Price).

Diligent Howard scholars might add the original draft of “The Phoenix on the Sword” with its references to “Cthulhu, Tsathogua, Yog-Sothoth, and the Nameless Old Ones,” or the various drafts of “Isle of the Eons” (which Price based his story on). Yet these bits and pieces are not in the public domain, not even available online. A case could also be made for excerpts from some of Lovecraft and Howard’s letters discussing the Mythos; so too, any number of other Howard stories related to Solomon Kane, Bran Mak Morn, Kull, Turlogh Dubh O’Brien and Conan the Cimmerian could have been included, since the settings intersect in various ways. H. P. Lovecraft mentioned “Bran” in “The Whisperer in Darkness” and Howard “the Bran cult” in “The Children of the Night,” so it wouldn’t be much of a stretch to include “The Dark Man,” for example.

So, The Cthulhu Stories of Robert E. Howard does not have absolutely everything. It also has no art, aside from a lovely stark black-and-white cover, “Spawn of the stars” by Sofyan Syarief. What else should a Howard Mythos collection have to give value for the money spent on it? What else should a reader expect?

Ideally, some sort of explanatory notes or essays on the story. Something that puts the texts in the wider context of the Mythos at large. David Drake did a bit of this in his 1987 introduction; Robert M. Price went one better and had notes on each individual story. The moderately obscure collection Mythos: The Myths and Tales of H. P. Lovecraft and Robert E. Howard (2011, Numen Books) includes a literary essay by M. Alan Kazlev. I myself wrote “From Cimmeria to R’lyeh: Robert E. Howard and H. P. Lovecraft,” an essay on the relationship of Lovecraft and Howard, and how it influenced their Mythos fiction which was included in the German collection Der Mythos des Cthulhu (2020, Festa). The Horror Stories of Robert E. Howard (2008, Del Rey), which contains many of these stories and others, includes an introduction by noted Howard Scholar Rusty Burke and notes on the original texts.

Wordfire Press turned to Paul Di Filippo, noted writer of science fiction and weird fiction. There’s no doubt that Di Filippo generally knows his stuff, and he’s not above pointing out that “Skull-Face” isn’t technically a Mythos story, and that “The Challenge From Beyond” only is because Lovecraft decided to actually inject some plot. However, despite his considerable talent, he’s not really a Mythos scholar. So he misses a lot of the fine details, content to summarize some stories and quote from others.

The result is fine for beginners to Howard or Lovecraft who don’t know any better, who are tired of staring at a screen and just want a nice hardback or paperback collection of Howard’s Mythos stories (most of them, anyway) curated for them. It is a well-made book, and the stories are pure Robert E. Howard...but it’s also nothing that anyone else could do, grabbing texts off the internet.

Which is going to be an issue going forward; we have already seen this kind of thing happening with H. P. Lovecraft’s fiction, the market flooded with innumerable editions. The peril of the public domain is caveat emptor: the same stories are there to be re-packaged and sold by multiple different publishers, then it is up to the reading public to decide what they want—and what they will pay for. The Cthulhu Stories of Robert E. Howard may not represent the nadir of laziness in this regard, but it is definitely a tidemarker: how much work actually went into this book? What is the point of it, beyond making money? What does it give you that you can’t already get better or cheaper somewhere else?

The answer to those questions is not much, not much, and an introduction by Paul Di Filippo, respectively. If that is worth your hard-earned money, have at it.