A Book Review: The Unique Legacy of Weird Tales by Todd B. Vick

This review is a month or so late, but with looming deadlines for writing projects, more on the horizon, and working 70 hour weeks, it’s a wonder it got finished at all. Lauren Bucca at Rowan & Littlefield was kind enough to mail me a review copy of this book. I’m very glad she did. I’ve read about a dozen or more academic anthologies on the various writers of Weird Tales, with an emphasis on Robert E. Howard, H.P. Lovecraft and Clark Ashton Smith. While some have been hit and miss—meaning, some of the chapters in a volume have been very good, others not so much—this volume was faithfully strong throughout. 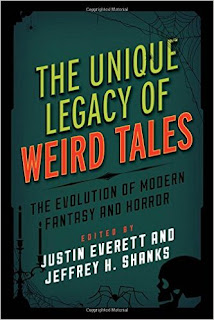 Edited by Justin Everett and Jeffrey H. Shanks (chair and co-chair of the pulp studies for the Popular Culture Association), this volume covers nearly every aspect of Weird Tales (the pulp fiction magazine) and some of its most popular writers from the early years. There are chapters devoted to the history of Weird Tales, literary reflections, and/or movements within its pages (e.g. weird modernism), collaborations of its writers, genres that stem from it (e.g. sword & sorcery), with special attention to H.P. Lovecraft and Robert E. Howard, and other topics. While this review will not be a chapter by chapter review per se, I will attempt to cull and discuss what I thought were some of the more interesting chapters and briefly describe the others (which are also very interesting and well worth reading).

Jason Ray Carney begins the volume with a discussion about the tenuous history of Weird Tales magazine, its lower than imagined level of readership—peaking at around fifty-thousand readers at the height of its popularity. He also details just how frail the magazine’s financial state throughout its existence. This chapter brings to the forefront some surprising facts and nice information, laying the nice groundwork for the over-all volume. If you are new to Weird Tales, then by all means read this chapter.

Jonas Pridas’ chapter on modernism within the pages of Weird Tales is quite interesting. Declaring that modernist writers were published in pulp magazines, they have, none-the-less been largely ignored. He takes a birds-eye view of modernist literature (some weird and some not) inside and outside of the magazine Weird Tales. Pridas discusses trends in various Modernist frameworks of weird literature, including science, Darwinism, and devils.

Daniel Nyikos discusses Weird Tales writers within the . This is a group that carries on regular correspondence with H.P. Lovecraft and each other, developing friendships with each other as they shared ideas, interests, and stories. Nyikos calls them a type of literary intelligentsia. This chapter was quite interesting since it details how these writers carried on with one another and their work.

Morgan T. Holmes’ chapter on the sword-and-sorcery in Weird Tales has, of course, a strong emphasis on Robert E. Howard and Conan the Cimmerian. However, Holmes also takes a look at Clark Ashton Smith and C.L. Moore’s contributions to the sword and sorcery sub-genre. Delving into the origins of sword and sorcery, Holmes demonstrates how the sub-genre develops and ultimate folds into current authors' works. He also has a section called ‘Sword-And-Sorcery Oddities’ that is intriguing, examining a few writers of note who perhaps made small but important contributions to Weird Tales and the sword and sorcery sub-genre.

Lately, scholars have been delving into issues of sex within the weird fiction genre. One such scholar is Bobby Derie, an H.P. Lovecraft aficionado. His chapter titled ‘Great Phallic Monoliths’ examines the use of sex, or the lack thereof, in Lovecraft’s stories. While some see this type of academia as fringe, even unnecessary, often times these kinds of studies uncover aspects about writers that help us understand why they used the source material they did and why they wrote some of the things they did. So, dismissing this type of critical research is not altogether wise. And, Derie is a leading scholar in this field. His chapter examines the sexual nature of Lovecraft and what various biographers and other HPL scholars have said about the topic, adding, of course, his own research to the issue.

The editors, Everett and Shanks each have excellent chapters well worth reading. Shanks delves into Robert E. Howard’s work titled ' of the Earth'. Shanks takes a look at what Virginia Richter has called the “anthropological anxiety” of western culture in post-Darwin literature. Howard’s ' of the Earth' makes use of anthropological themes and tropes in this story. Shanks points out that Howard’s use of “little people” function as a euhemeristic source for the legends of elves, dwarfs, and other fairylike creatures. And '' is not the first time Howard used such characters. Shanks provides a nice summation of Howard’s use of these kinds of characters, how they are used in ' of the Earth' and the influences of these tropes from other authors Howard had read.

’s chapter is titled ‘Eugenic Thought in the Works of Robert E. Howard.’ Eugenics is the school of thought ("science") that uncovers how races can be improved by careful breeding. Howard certainly read some of the more popular (and some relatively unknown) anthropologists of his day. Naturally, the ideas he learned from reading these scientists aided him in creating various characters in his stories; pigmy or ‘little people’ races in particular. takes his readers through the history of eugenics, how Howard uses it in his stories and his correspondence with H.P. Lovecraft.

Briefly, other chapters cover how the Weird Tales writers collaborated via their correspondence, and the end results (Nicole Emmelhainz), Scott Connors, a Clark Ashton Smith scholar, has a wonderful chapter titled ‘Pegasus Unbridled.’ Connors discusses the harsh reality of the pulps being reduced to a kind of “ghettoization” and why, perhaps, that wrongfully occurred. Geoffrey Reiter discusses world building in the works of Clark Ashton Smith. Jonathan Helland delves into gender, women, Brundage, and C.L.  , in the October 1934 Weird Tales issue. Lastly, Paul W. Shovlin has a chapter devoted psychological “madness” of Robert Bloch’s weird stories, and Sidney Sondergard discusses what he aptly sub-titles ‘Harold Lawlor’s Self-Effacing Pulp Fiction.’


Having already read about a dozen academic anthologies devoted to Lovecraft, Howard, and even Clark Ashton Smith, as well as other pulp writers and writers of weird tales, I can safely say this is one of the better collections. And even though it has a hefty price tag (even the eBook is a bit high), it is very much worth it if you are interested in delving into critical secondary works about some of the greatest popular (pulp) fiction writers of the early to mid-20th century. I highly recommend it!

Every holiday season The Robert E. Howard Foundation sends out some kind of holiday greeting. They have ever since I've been a Legacy Circle Member—which has been for about 4 years now.

In previous years, it has been greeting cards . . .


In the past, Legacy Members have also received lapel pins with various pictures of Robert E. Howard on them. I have pins dating back to 2012, and I've seen others at REH Days with much older ones.


This year, however, The Robert E. Howard Foundation sent Legacy Circle Members this . . .

Membership certainly has its benefits and privileges. If you have not already become a member of The Robert E. Howard Foundation, I certainly would encourage you to do so. Not only does it help get more material published, but it demonstrates your passion for the greatest pulp writer in the Whole Wide World. Also, throughout the year, you get a very nice quarterly newsletter with a lot of goodies inside it. Happy Holidays! 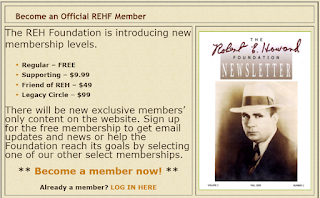 Intro From Part One:

[Some considerable work has been done by Howard scholars Dr. Charlotte Laughlin, Glenn Lord, L. Sprague de Camp, Steve Eng, and Rusty Burke to identify the books that comprised Robert E. Howard’s personal library, based primarily on the holograph list of books that Dr. I. M. Howard donated to form the Robert E. Howard Memorial Collection after his son’s death, as well as Robert E. Howard’s surviving letters and papers. Among these books are a number of works of erotica or curiosa which, while not pornographic to contemporary tastes, were nevertheless concerned with some aspect of sexuality (usually from a scholarly or pseudo-scholarly perspective) and were often treated as such. It is interesting to see, based on these books, what light if any they can shed on Howard’s life and work.]

The Merry Order of St. Bridget (1868) by Margaret Anson (James Glass Bertram) is a flagellation novel by the author of A History of the Rod, with most of the whipping occurring between women. The Misfortunes of Colette (1930), published for subscribers only, may have been a Gargoyle Press title; a translation of a 1914 French erotic novel about a couple that works to keep Colette in servitude via various tortures. Closely related is Presented in Leather: A Cheerful End to a Tearful Diary (1931) by Claire Willows, where a girl named Flora is imprisoned and tortured by her aunt, waiting for rescue. It is not impossible that one of these works helped inspire Howard’s idea of “lesbianism” being expressed in such a violent fashion.

Painful Pleasures (1931) is an anthology of flagellation anecdotes culled from French sources, translated by W. J. Meusal and published by Gargoyle Press, which specialized in flagellation literature, advertised in the pulp magazines, and sold by mail. (Gertzman 76) Another Gargoyle Press title on Howard’s list is The Strap Returns: New Notes on Flagellation (1933) by Anonymous (Samuel Julian Wegman and Sydney Frank), which consists of a number of accounts of corporal punishment ostensibly taken from American and European newspapers.

Nell in Bridewell: The System of Corporal Punishment in the Female Prisons of South Germany Up to the Year 1848, A Contribution to the History of Manners (Burke notes the 1900 first edition, but the 1934 reprint seems more likely) by Wilhelm Reinhard is another quasi-historical work of corporal punishment, translated from the German.

Tracts of Flagellation (1930) is a privately printed collection of flagellation works reputedly taken from the library of English antiquarian Henry Thomas Buckle (hence Howard’s note): 1. Sublime of Flagellation; 2. A Treatise of the Use of Flogging in Venereal Affairs; 3. Madame Birchini's Dance; 4. Fashionable Lectures; 5. Lady Bumtickler's Revels; 6. Exhibition of Female Flagellants in the Modest and Incontinent World; 7. Part the Second of the Exhibition of Female Flagellants. The assertion “by George Colman” may be due to some editions of Tracts including the epic erotic poem The Rodiad (1871), which was falsely attributed to George Colman the Younger in, among other places, Curiosa of Flagellants. Howard’s entry for The Rodiad directly below Tracts likely suggests he was either unaware of this, or else the catalogue or advertisement he was referring to did not make it plain.