North Dakota, where I have lived for many years, is an under-represented state in the history of weird fiction. So one of my favorite footnotes is the elusive Carl Swanson (May 25, 1902 — November 16, 1974), who corresponded with Lovecraft, inspired The Fantasy Fan fanzine, and collaborated with Jerry Siegel, all while living in Washburn, ND. One of his best-known ventures is an attempt to start a magazine called Galaxy, although, judging by references in the letters of Robert E. Howard and H.P. Lovecraft, the idea swiftly rose and fell.

In March 1932, Lovecraft provided more information. “Swanson’s plans are slowly taking form. The new periodical will be called Galaxy, & Derleth understands that the rate of pay will be about ¼ (cent) per word. The magazine will sell for 10 (cents), or $1.00 per year. Wright of W.T. is rather worried about the coming competition, & tends to resent the sale of reprinting rights to Swanson by his authors” (25).

This would come up again in March 1935, when, speaking of Wright and reprint rights from Weird Tales, Lovecraft says, “The only smallness he ever displayed in a matter of reprinting was some years ago, when Swanson of Dakota intended to found a magazine of second appearances” (217). Also in March, Howard wrote to his friend Tevis Clyde Smith that “a man named Swanson is publishing a magazine in one of the Dakotas, on the weird order. I’ve neglected my chances, until I wonder if the thing’s about up ten years ahead. Lovecraft wrote me that he’d placed a couple of yarns, and evidently the old weird tale buccaneers have descended on it like a horde of vultures” (315). 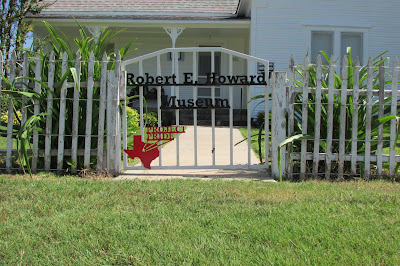 This year was my seventh straight year to attend Howard Days in Cross Plains, Texas. Every year I meet new people and learn new things, and that alone keeps me wanting to come back the next year. But in addition to meeting new people and learning new things, there is so much else going on, trying to take it all in can sometimes be a bit overwhelming. This year’s theme was celebrating REH Fans and the keynote speaker was, Bill “Indy” Cavalier, long time Howard fan and OE (Official Editor) of The Robert E. Howard United Press Association (REHupa). Moreover, most of the panels this year were geared to the fandom of Robert E. Howard. Every year I can summarize the event itself usually in one word. This year that word is fellowship.

It may have simply been the group I spent the most time with this year, but there were a lot of people who knew one another via the internet but had never met before in person. So "meeting" for the "first time," so to speak was a prominent feeling and activity. That was the case for me with several online friends who also attended the event this year. David J. West, author and guest writer here at On An Underwood No. 5, whom I have known online for many years, attended this year’s event for the first time. We had previously discussed him possibly attending previous Howard Days, and I had explained that I could pick him up from the airport and we could always drive to the event together. This year he took me up on that offer, and I’m glad he did. Getting to meet David J. West and hang out with him this year was a highlight for me. Moreover, when we arrived in Cross Plains, West was looking for others whom he had met online but had not met in person, so we eventually crossed paths with author Keith West (a regular attender to Howard Days), Jason M. Waltz (Rogue Blades Entertainment), and eventually we connected with author Ty Johntson. I was also able to reconnect with other regular Howard Days attendees (e.g. Bobby Derie, Scott Cupp, Scott Valeri, Russell Andrew, and many others). I was also able to finally meet Rob King (and his wife) who has helped me a little in my current research.

Hot (and a little bothered) Off The Press by Gary Romeo

A Critique of Patrice Louinet’s The Robert E. Howard Guide

Most entertaining for me were the summaries of fifty great REH stories.  Patrice revisits the twenty best in Chapter 3, followed by thirty more in Chapters Four and Five.  It is always fun to remember why you love REH in the first place and the comments on these stories really do reemphasize why REH is a writer worthy of respect and study.

There is little new here for older REH fans but there may be things for older and newer REH fans to digest and argue about.  Especially Chapter One where Patrice discusses common misconceptions about Howard.

The first myth brought to task is that Howard was convinced Conan had really existed.  Patrice rightly destroys this notion mostly originating from John Milius.  It has always been my opinion that Milius may have read Chamber of Darkness #4 (Marvel Comics, 1970).  This issue contains a very good story by Roy Thomas and Barry Smith entitled “The Sword and the Sorcerers.”  The story features a sword & sorcery author named Len Carson.  Len is having nightmares about his Starr the Slayer character and decides to kill him off.  Starr materializes from the ether and kills off Len before Len can kill him in his story.  This is a great tale about a sword and sorcery author and is easily morphed into it being about Robert E. Howard if you are so inclined.

The Blunders of One Weird Tales Artist: Curtis Charles Senf by Todd B. Vick

The September 1931 Weird Tales had, perhaps, one of the most farcical blunders ever committed by a magazine illustrator, and it happened to one of Robert E. Howard’s most popular and prized characters, Solomon Kane. The artist was Curtis Charles Senf (C.C. Senf), who at the time, lived in Chicago and began drawing covers and interior illustrations for Weird Tales. His debut cover was the March 1927 issue. In fact, Senf did 8 of the 12 covers for Weird Tales in 1927, and 11 of the 12 covers for 1928. His numbers tapered off a little after these two years, but over-all, Senf was the artist for 45 covers at Weird Tales. In addition to this, he drew hundreds of interior illustrations for The Unique Magazine. To say he was a seasoned magazine artist and illustrator is a slight understatement. However, and this is a pretty big however, he eventually stopped reading the stories he illustrated, and the results were laughable, and even angered some of the writers for Weird Tales.

Curtis Charles Senf was born on July 30, 1873, in Rosslau, Prussia. In 1881, when he was a boy of eight, the Senf family emigrated to America on the S.S. Wieland. They landed in New York City on June 28 and then ultimately settled in Chicago, Illinois. His father's occupation was listed only as "workman."[1] C.C. Senf attended public school and upon graduating high school, he enrolled in the Chicago Institute of Art. Following his art studies at the Chicago Institute of Art, Senf became a commercial artist and lithographer. Eventually Senf opened an art agency called Senf & Company with Fred S. Gould. This venture failed and eventually was forced to file bankruptcy in 1903. There are no other details about employment for Senf until he becomes a regular artist for Weird Tales. By the time he landed the job of cover and interior artist for Weird Tales, Senf was almost 54 years of age.

Given the fact that the cover art for Weird Tales prior to 1927 was average to downright terrible, Senf was a welcomed edition to the magazine. Even H. P. Lovecraft, who was often picky about weird art (and weird fiction), expressed hope that this new artist might create better cover art than previous artists had for the magazine. In a January 1927 letter to August Derleth, Lovecraft declared, “I shall welcome the new cover artist, & can feel sure at least that he can’t be any worse than those who have hitherto messed up the magazine.”[2] His hope would be short lived, by June of that same year, Lovecraft told Derleth, “. . .the present ‘artist’ Senf has no sense of the fantastic whatever.”[3] While Lovecraft is not necessarily incorrect in his over-all opinion about Senf’s work, Senf “could do a truly weird cover, one of his best being for ‘The Bride of Dewer,”[4] and there were a few others. In fact, a little later in this article, we will look at another truly weird cover Senf did (and perhaps one of his best works) toward the end of his career at Weird Tales.  Moreover, in 1927 Senf was reading the stories and illustrating them according to their content, so this last sentiment by Lovecraft was merely a stylistic complaint on his part. Senf’s artwork, for the most part, was “better” than the work of previous artists for the magazine, his style was that of late 19th century artists, with nice detail, color, and vivid scope, and he excelled when the story was a period piece. Even so, in many ways, Lovecraft was correct, Senf’s sense of the fantastic and/or weird was not the greatest.