The Ships of Hy-Brasil Part 2 by Barbara Barrett

[In his poem, the “Isle of Hy-Brasil,” REH brings to life the fabled isle that existed even when the pre-historical islands of Atlantis and Lemuria were still afloat in the Atlantic and Pacific oceans. According to Wikipedia, the isle, also known as Brazil, Hy-Brazil, and several other variants, is steeped in Irish myth. It is a legendary phantom island cloaked in mist, except for one day each seven years when it becomes visible but still unreachable. Similar in myth to that of St. Brendan’s Island (var. Brandon) it is shown as being circular, often with a central strait or river running east-west across its diameter. Despite failure in the attempts to find Hy-Brasil/St. Brendan’s Island, it appeared regularly on maps lying southwest of Galway Bay from 1325 until 1865.]

And there’s a Roman galley with its seven banks of oars,


Iain Spence’s Historical Dictionary of Ancient Greek Warfare gives this definition of a galley with seven banks of oars:

Seven (hepteres) [septireme]. A large warship, developed from the six, probably by adding extra (standing) oarsmen at the lowest level. It had a clear advantage over smaller craft in heavy weather. Sevens (and larger ships) were probably equipped with towers, carried catapults and considerable numbers of troops and used firepower and boarding rather than ramming. The seven was a large ship and most navies possessed only a few, so they were often used as flagships (Historical Dictionary of Ancient Greek Warfare by Iain Spence.) [NOTE: the six (hexeres) was around 145 feet (45 meters) long. It probably had three rows of oars on each side, like a trireme or a five (penteres) but with the oars on all three of the levels on each side worked by two men.] 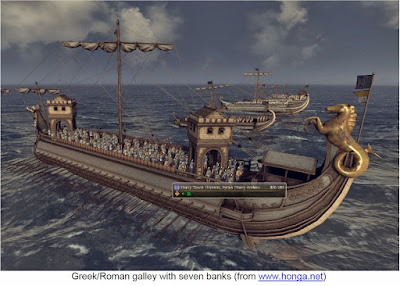 And there’s a golden barge-boat that knew the Caesar’s hand, 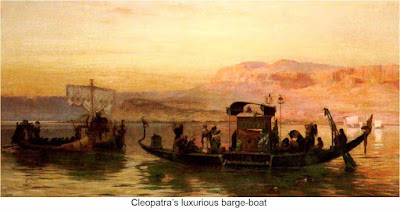 A barge-boat is any of various boats with roomy, usually flat-bottoms and used chiefly for the transport of goods on inland waterways or as luxurious passenger boats. Caesar’s would have been as well appointed as that of Cleopatra’s.[1]

And there’s a sombre pirate craft with shattered cabin doors, 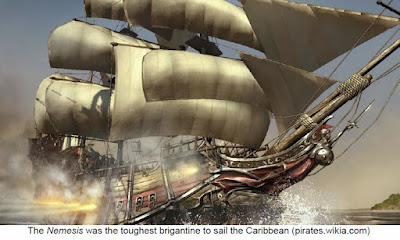 While the Brigantine was often the ship of choice for pirates, it was also very popular as both a merchant and naval ship. It could carry 10-16 guns and was rigged for speed, having two masts with both top gallant sails and royals rigged to each mast. World-wide it was often used by navies for scouting and reconnaissance duties. Many brigantines in the late 1800s carried sweeps for maneuvering in still weather. In 1814, the British Navy had 71 of the Brigantine’s in active service. Length: 110 feet; Beam: 28 feet; Depth: 16 feet; Crew: 110-120 men. [NOTE: By the first half of the 18th century the word brigantine had evolved to refer not to a ship type, but to a particular type of rigging: squared rigged on the foremast and fore and aft rigged on the mainmast.] [2] 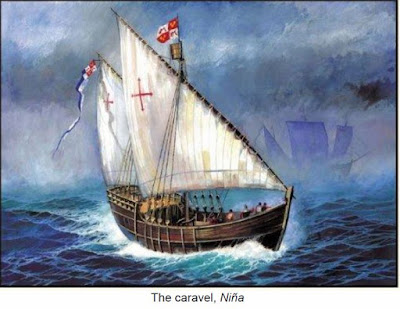 According to the information on angelfire.com’s “Who Was Christopher Columbus,” for his journey, Columbus obtained three "caravels" or small ships, 50-100 feet long, with no sleeping quarters. They were named the Niña, the Pinta and the Santa Maria. However, Wikipedia states that the Santa Maria was a type of carrack (see below) and was Columbus’ flagship although he preferred the Niña because of its better ocean performance. What these caravels looked like exactly is unknown at this time…but it is thought the above images resembles them.

The caravel was also popular with pirates and was used from the 14th to the 17th centuries primarily as a cargo ship; the Mediterranean version was lateen rigged on two masts, while the Spanish and Portuguese versions were three masted with the first two masts square rigged and the mizzen lateen rigged. [NOTE: both the masts have lateen sails which are triangular in shape.]

The unusual design of the Carrack also made it a favorite of pirates. 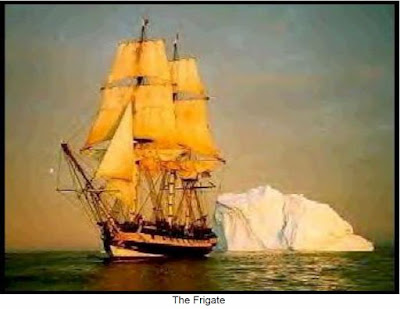 Frigate was a name used for a variety of ships from small oared boats to three masted sailing ships. The name was formalized by the English in the late 17th century to mean a vessel smaller than a ship of the line, carrying 24-38 guns on a single deck with three fully rigged masts. Their speed made them better suited to convoy duty and hunting pirates. [3]