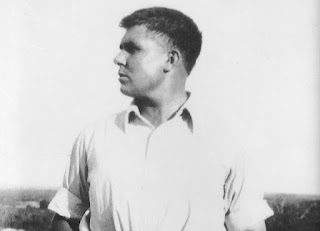 A week before [Robert E. Howard] killed himself, he wrote to Otis Adelbert Kline (his literary agent except for sales to Weird Tales): “In the event of my death, please send all checks for me to my father, Dr. I M. Howard.” His father found two stories on which he had typewritten: “In the event of my death, send these two stories to Farnsworth Wright, Editor of Weird Tales, 840 N. Michigan Avenue, Chicago.” (IMH 84)

Robert E. Howard had made preparations for his death; Kline confirmed in a letter to Carl Jacobi that:

About three weeks ago he wrote me a letter saying that, in case of his death I should get in touch with his father. (IMH 68)

Kline’s letter is praiseworthy, both of Howard's and Kline’s ability to market him, noting that despite caring for his dying mother, Howard “has been doing a lot of brilliant writing, and we have opened a number of new markets for him with character-continuity series.” (IMH 68)

As a client from May 1933 to July 1936 (38 months), Robert E. Howard had cleared at least $2150 through Kline’s sales—and almost assuredly more, when you consider the stories that don’t appear in the ledger or Otto Binder’s commissions list. The Kline agency for its part probably cleared about $250-300 in commissions (at least the standard 10% of Howard’s sales, possibly 15% for sales before 1935). By the numbers, this wouldn’t make Howard the Kline agency’s best client; in 1936 John Scott Douglas “was good for at least thirty to forty dollars a month commissions in New York alone.” (OAK 16.1) However, Kline also stated that:

I send back for keeps approximately 80% of the material I receive [...] Of the other twenty per cent, I accept perhaps a fourth, and sometimes as high as a half, depending on how the stuff runs. The balance is returned to the writers for revision, some if [sic] it again and again, until they have done as well as they can do with it. Only then is it put on offer, and of course not all of it goes to New York. Some goes to Canada, England or other foreign countries. I select the markets to which it seems best suited. (OAK 16.2)

By this standard, at least, Howard seems to have been ahead of the pack: the only story Kline is known to have sent back without trying it on the market was “Wild Water” (IMH 19), and while Kline initially struggled to market Howard’s fiction, and advised him on revising his work and breaking into new markets, as the years went on Kline was selling a greater and greater percentage of the work that Howard sent him; Binder’s commissions list for the New York end of the business in 1935 lists more commissions from sales of the Texan’s work than any other client. (OAK 5.18) If Howard was not Kline’s best client, he was at least a steady one, and an appreciative one, as Kline uses a statement from Howard in the brochure for his United Sales Plan:

ROBERT E. HOWARD, popular author of stories in ARGOSY, ACTION STORIES, TOP NOTCH, WEIRD TALES, etc., says: I have the highest regard for Otis Adelbert Kline’s ability as a practical critic, and his knowledge of market requirements and current literary trends. His advice and sales service have been very valuable to me. (OAK 5.12)

News of Howard’s death propagated by mail, in a letter from Binder to Kline dated 27 Jan 1936, we see that Kline confirms the worst:

Just last night, as chance would have it, I heard from Frank Long, Jr. of the suicide of Howard. He had got it from Donald Wandrei. But Lovecraft said it might be an unfounded rumor, and I was hoping it was till I received your letter this morning. Quite a shock, any way you look at it, and it doesn’t make sense to me, in view of the promising outlook for Howard in the near future. (IMH 61, OAK 5.16-17)

After Robert E. Howard’s death, the copyrights to his stories (those he had not sold) and remaining manuscripts rested with his father, Dr. Isaac M. Howard; as the estate was settled, Kline continued to act as REH’s agent for manuscripts already in circulation, and Dr. Howard offered to keep Kline on as the agent for all of his son’s remaining manuscripts in all markets—including Weird Tales, which still owed Robert E. Howard over $1,000 at the time of his death—and Kline appears to have accepted. (IMH 80) The details of REH’s estate, and the pulp business, were more complicated than Dr. Howard anticipated, as explicated by a flurry of often somewhat ornery and demanding letters from elder Howard (IMH 86-92, 107-113, 115-119, 122, 125, 127-129, 135). The stress of the loss of his loved ones, and associated financial burdens are well documented; as Dr. Howard put it in a letter to Farnsworth Wright:

I turned Robert’s business over to Mr. Kline because I did not feel like carrying it on. [...] Mr. Kline will carry on my business, and since you have given me an inkling of your financial condition I think I shall be more patient about things in the future; but just now it is hard sledding with me. (IMH 106)

The Kline agency continued selling the work of Robert E. Howard, included projects realized and unrealized. Yet before Dr. Isaac M. Howard died on 17 November 1944, he would at least see at least one of his son’s novels, A Gent from Bear Creek, and story (“The Black Stone”) between hard covers, in the Arkham House anthology Sleep No More (1944). (IMH 226) On his death, the rights to Robert E. Howard’s writings were willed to his friend P. M. Kuykendall, who appear to have kept much the same arrangement with Kline—whose business had declined so badly during World War II, due to the stoppage of foreign sales, that he had to work in a wartime production plant. As E. Hoffmann Price would put it:

Few of us realized what fortitude and hard work and keen vision OAK must have had, to launch his venture, and to make it pay off. And, just as it began to look good, the war bitched it up. Foreign exchange was frozen. The Unified Sales Plan was dismembered as a war time casualty. OAK, nearly as I know, maintained his domestic-and-Canadian sales program. What I did not known until years after his death, was that much of his time during the war was devoted to working in war production plants. Came V-J day, and OAK was reorganizing. (OAK 7.6)

Otis Adelbert Kline would pass away on 24 Oct 1946. His friend Price would eulogize him:

Wright—Howard—Lovecraft—they were equally well wishers, each in his way and according to his ability—but Otis was the most able to reinforce his wishes with action, and this he did, effectively and generously, and with a zeal far beyond that of the most earnest paid advisor. (OAK 7.12)

With the death of Otis Adelbert Kline, his agency was not dissolved, but passed into the care of his daughter Ora.

After my father died, I took over the agency for 1 ½ years. I had an infant daughter, born 2 months after his death, and my then husband was being transferred to Texas. It would have been impossible to take the agency with me. We turned over everything to Oscar Friend, including material published and unpublished, records, files, etc. I do not know what all was there, but I know there was an unpublished Mars novel. Oscar Friend ran the agency under the Otis Kline Associates name, and was to handle all material on behalf of my mother, for future sales of OAK material. (OAK 2.10)

Friend continued working as agent with the Kuykendalls as administrators of the Howard Estate, and even as agents for H. P. Lovecraft’s material in the United Kingdom in the late 1940s. As Glenn Lord tells it: “Friend died around 1963 and at the end of 1964, his wife and daughter decided to dissolve the agency. That was when I became the Howard agent.” (OAK 1.3)

This is largely the end of Conan and the OAK—except for a few little mysteries. On 17 Jan 1940, Kline wrote to Dr. Howard:

As you know, editorial needs change from year to year, and it frequently happens that stories which would have sold readily from five to ten years ago, although they may be as good or even better from a literary standpoint than current published material, as not suited to current editorial requirements. It is sometimes possible, however, by making revisions, to make such stories fit modern requirements. All of Robert’s material now on offer is from several years to a dozen years old, and while I have not entirely given up hope of placing it, just as it is, it is possible that we might be able to speed up sales by having some of these revised and brought up to date, when and if current market possibilities have been exhausted. Naturally, such work could be entrusted only to the best writers. And I have an idea I might be able to get some or one of these to work on a 50-50 contingent basis, taking 50% if the story should sell, or nothing if it should not. (IMH 171)

There has been some dispute about to what extent the Kline agency had a hand in revising some of REH’s works posthumously. Glenn Lord noted:

Four Elkins tales appeared several years after Howard’s death. The first of these, “Texas John Alden,” appeared in 1944 in Masked Rider Western under the pen name Patrick Ervin. This was originally a Buckner J. Grimes tale entitled “A Ringtaled Tornado,” and someone connected with the Otis A. Kline literary agency—which was handling Howard’s work—revised the story into an Elkins tale. I suspect that Kline himself was responsible for this. In 1956, a second Elkins tale, “While Smoke Rolled,” appeared in Double-Action Western. This was originally a Pike Bearfield story, and again someone connected with the Kline agency—either Kline before his death in 1946, or Oscar Friend, his successor-had revised this into an Elkins tale. (CS 29-30, OAK 10.13)

There is an annotation in the ledger regarding “Ring Tailed Tornado”/”Texas John Aldon” that is is a “rewrite,” and the figures would suggest it sold for $55.00; the figures don’t all add up, but appear to be attempting to factor in a 50-50 split plus agent’s commission; figures for the “While Smoke Rolled” are not available. (IMH 372) The degree of Kline’s hand in these revisions, or whether he got someone else to do it, is difficult to determine.

A more interesting problem is the science-fantasy novel Almuric, which was sold to Weird Tales in 1938 and paid for in installments in 1939—before any record of Kline making an offer to revise Howard’s stories (although the correspondence is spotty); the question of whether Almuric was revised is too long to go into here, but it’s worth noting that the Kline ledger does not note any splitting of fees—if the story was revised or completed by someone else, they don’t appear to have received a cut.

I did. Good catch.

Did the non-payments from Weird Tales factor into his decision to kill himself?