5: Fan Mail and The Hyborian Age

This morning I took out a big registered envelope with a “War Department” letter-head. I had visions of me shouldering a Springfield already, but it was from a gentleman named Barlow, at Fort Benning, Georgia, asking me for my autograph, for which purpose he enclosed a blank sheet of paper and a stamped self-addressed envelope.  (CL2.273) 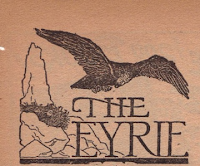 Robert E. Howard’s interaction with the burgeoning science fiction fandom went beyond praising his friend’s stories or receiving the occasional solicitation for material from for inclusion in a fanzine. In “The Eyrie” of Weird Tales and “The Cauldron” of Strange Tales, Howard was often picked out as a favorite by the readers who wrote in, but now that his name (and, perhaps more importantly, his mailing address) was being spread about by Lovecraft, E. Hoffmann Price, and others, Howard began to interact with his fans directly.

Robert H. Barlow was perhaps the first to get in touch, having already been a correspondent with H. P. Lovecraft and part of the circulation list for Lovecraft’s stories. As a fan, Barlow was an avid collector who seems to have seldom flinched from asking for autographs, original manuscripts, and art from various writers, and a surprising amount of the time seems to have gotten them. Howard sent Barlow typescripts of “The Phoenix on the Sword”, “The Scarlet Citadel”, “Black Colossus”, “Iron Shadows in the Moon”, and “A Witch Shall Be Born” (CL2.519, 3.219), as well as a letter from Henry S. Whitehead (CL3.47), but begged off parting with his collection of Hugh Rankin illustrations (CL3.212-213, 215).

Their correspondence seems to have been mostly slight but cordial, with Howard praising Barlow’s fiction in The Fantasy Fan (CL3.215), and thanking him for the output of the young fan’s own amateur press: Frank Belknap Long’s The Goblin Tower (CL3.394), Lovecraft’s The Cats of Ulthar, and Barlow’s own amateur journal, The Dragon-Fly (CL3.417). Barlow in turn seems to have appreciated Howard’s generosity as well as his writing ability; collaborating with Lovecraft on The Battle That Ended The Century that included “Two-Gun Bob” (authored anonymously and circulated privately among Lovecraft’s correspondents, CL3.248), and authored the touching elegy R.E.H., which appeared in Weird Tales.

Emil Petaja appears to have contacted Howard through The Fantasy Fan, or possibly a common correspondent like H. P. Lovecraft, in late 1934. Petaja dedicated his poem “Echo from the Ebon Isles” (also published as “The Warrior”) to Howard, who replied:

I feel deeply honored that a poem of such fine merit should be dedicated to me. You seem to grasp the motif of my stories, the compelling idea-force behind them which is the only excuse for their creation, more completely than any one I have yet encountered. This fine sonnet reveals your understanding of the abstractions I have tried to embody in these tales. The illustration fits the text splendidly, and partakes of its high merit. I foresee an enviable future for you as a poet and artist. (CL3.259-260)

A commendation and encouragement that Petaja would remember decades later, and quote in the introduction to his poetry collections As Dream and Shadow (1972). For his own part, in response to requests for manuscripts Howard sent Petaja a copy of his poem “Cimmeria” (CL3.260), as well as an unknown manuscript, on the back of which was written the draft to “Black Canaan” (CL3.304). Their correspondence lasted at least a year, with Howard offering general praise, encouragement, and thanks, adding in their final extant letter:

I am much interested in the magazine you and Mr. Rimel are contemplating launching; I wish you the best of luck with it, and would be more than glad to contribute to it. (CL3.369) 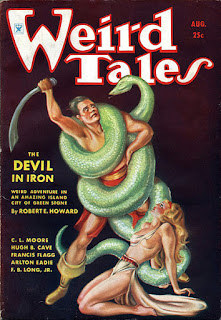 Such offers to fanzines were genuine, though Howard continued to focus on paying markets, and Howard seemed just as happy to answer questions as he was to provide rejected stories. One fan, Alvin Earl Perry, was a regular reader of Weird Tales and a great fan of Conan the Cimmerian, who landed several letters in “The Eyrie” which Howard could not have missed, particularly one plaudit from the October 1934 issue:

Robert E. Howard held me enthralled throughout his masterpiece, The Devil in Iron. With each succeeding tale Howard becomes better; his unique character, Conan, is the greatest brainchild yet produced in weird fiction, even overshadowing Moore’s Northwest Smith and Quinn’s dynamic little Frenchmen, Jules de Grandin. Yet, despite Howard’s fine work, I believe that the best tale in the current WT is The Three Marked Pennies. (WGP 60)

In 1935, Perry wrote to Howard, as well as E. Hoffmann Price and A. W. Bernal, seeking biographical information for a series in the Fantasy Magazine, and Howard obliged with a letter of his own, which became “A Biographical Sketch of Robert E. Howard”, published in July 1935. 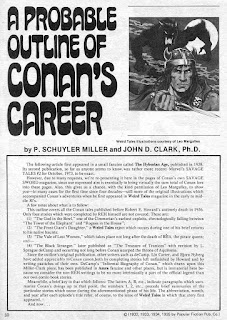 The final, and arguably the most important, fans to contact Robert E. Howard were P. Schuyler Miller and Dr. John D. Clark, who had collaborated on “A Probable Outline of Conan’s Career”, one of the premier efforts in Howard studies. Miller had written Howard in early 1936, and the Texan replied in a letter dated 10 March 1936, providing many additional details and ruminations regarding the Cimmerian, as well as a copy of Howard’s own essay, “The Hyborian Age,” which the Phantagraph had begun to serialize in February. (CL3.428-431)

Howard’s death in June threw off the serialization of “The Hyborian Age,” which was never completed. Donald Wollheim and Wilson Shepherd planned to issue the complete “The Hyborian Age” as a separate booklet (LRBO 280, 334, 338, 353), and then considered a book publication of Howard’s fiction, which Lovecraft provided advice on until shortly before his own death in 1937. (LRBO 362, 364, 365, 367, 370) Finally, Wollheim collaborated with John Michel, Forrest J. Ackerman, Russell Hofkins, and Myrtle R. Douglas to published the whole of “The Hyborian Age” as a chapbook, including Miller and Clark’s “A Probable Outline of Conan’s Career.” (THA viii)

Bob Howard was survived by his father, who seemed to be little aware of his son’s dealings with fandom. In 1943, a copy of The Hyborian Age was provided to Howard’s father by E. Hoffmann Price, who noted:

The publishers, Hodgkins, Wollheim, Ackerman, Michel, are—at least, Wollheim and Ackerman were—leading fantasy fans, outstanding collectors and fanciers of weird fiction. Probably all or most of them are now in the army. I no longer hear of them, or from them. But the opinions these people have assembled in this booklet regarding Robert’s work are widely share; this is a fair & representative expression of esteem. So I am happy to offer it to you. (CLIH 188) 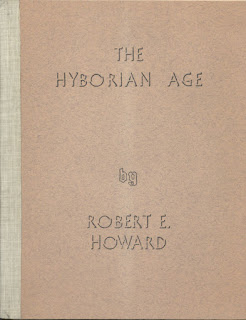 Robert E. Howard’s death was not the end of his appearance in the fan papers; his posthumous career began with a memorial from H. P. Lovecraft in the Fantasy Magazine and the installments of “The Hyborian Age” in the Phantagraph, but came to include previously unpublished poems, letters, and stories. In the decades to come, an amateur press association and fanzines dedicated to Howard and his creations appeared, and would proliferate, continuing to the current day. In a real way, Howard’s involvement with amateur journalism, culminating in his association with the growing fandom community, would help to establish his legacy as much as his professional fiction.