On the Trail of Grotz: A Lone Scout, A Picture, and a Road Trip by Todd Vick

If you've heard of Herbert C. Klatt then you might have a decent grasp of Robert E. Howard (hereafter REH) history. Klatt is one of REH's lesser known friends, which is unfortunate given the amount of information REH scholars can draw from Klatt's life to aid them in gaining a better understanding of REH. Here's what I mean.

It was through the Lone Scouts that Klatt became acquainted with another of REH's friends, Truett Vinson. Klatt and Vinson began corresponding with one another in early 1923, and a friendship ensued. The correspondence between Klatt and Vinson can not be understated because it was through this early correspondence that both Vinson and Howard (and eventually Tevis Clyde Smith) ultimately met and befriended not only Klatt but Harold Preece.

Klatt was a year younger than both Vinson and Howard, and attended school in nearby Hamilton, TX (just up the road from Aleman, TX). Like Cross Plains, Hamilton's school progressed to the tenth grade, so Klatt had to go one county over to Ireland High School to complete his high school education. Even though Klatt's family found success cultivating the land they purchased in Aleman, Klatt was quite poor as a teen. The only job he ever had was working on the family's land for room and board at his own home. Even so, like Howard, Vinson, Smith, and Preece, Klatt had aspirations to be a professional writer. And for a brief stretch he received a small sum of money from various newspapers/journals to which he would submit.

Through several years of correspondence, Klatt became well acquainted with Howard, Vinson, and Smith, whom he later dubbed "The Rollo Boys." The week after Christmas in 1925, Klatt was able to take a train to a town "40 miles" outside Brownwood, TX (according to the semi-autobiographical work by Howard titled Post Oaks and Sand Roughs (POSR)). Traveling back toward Brownwood, the group stayed the night on a ranch owned by Smith's family. You can read about the evening in REH's correspondence as well as the fictional semi-autobiographical POSR (Hubert Grotz was the fictional name given to Klatt in POSR).

For several years, Klatt contributed articles to Southland Farmer, Lone Scout (the organization's official organ), Dixie Eagle, Hamilton Herald-Record, among others. Unfortunately, Klatt died at the young age of 21. He suffered the last few months of his life from complications due to pernicious anemia.

A few years back, Rob Roehm published a book through his own press, Roehm's Room Press, titled Lone Scout of Letters. The book is a collection of various writings from Herbert C. Klatt, with historical information about Klatt, his family, etc. It also features some writings by Truett Vinson. In fact, this book is one of the very few places a researcher can turn to get the writings of Vinson and Klatt.

For my current research, I recently read Lone Scout of Letters from cover to cover. Throughout the book Roehm placed pictures of Klatt, his home, Klatt and his friends, and several pics of places Klatt visited. One such place was the Brazos river. The Brazos is one of the more famous rivers in Texas that runs through a large portion of the state. It is also the 11th longest river in the U.S. As I was reading through Rob's book, on page 98, there was a picture of the Brazos river taken by Klatt (according to the back of the photo). The backside of the photo indicated that the picture was taken near Walnut Springs, Texas.

So, like a good researcher, I got on my computer, pulled up Google Maps and typed into the search engine "Walnut Springs, Texas." I used the map to see if a portion of the Brazos rivers was close to Walnut Springs. Sure enough, just north east of Walnut Springs, about 24 or so miles, is the Brazos river. I clicked on the Google Earth portion of the map to get the exact satellite image, zoomed in on the river and followed it for a stretch until I found a crossing just Northeast of Brazos Point, TX & Eulogy, TX. Zooming in on that crossing I saw two bridges, side by side. One is the newer, paved highway (Farm Market Road 1175 which connects with Farm Market Road 1118 just the other side of the Brazos). The second bridge is older, and almost looks like a railroad bridge across the river. I zoomed in as close as Google allowed, then hit the street level and voilà, an older street bridge. 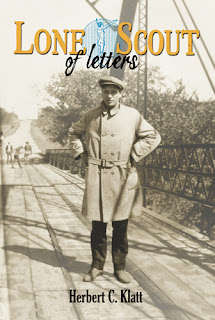 So what does this mean? Well, the cover of Rob Roehm's book is a photo of Herbert C. Klatt on a bridge. And if you take a close look at the structure of the bridge, you can see some distinctive features in the steel work (grid patterns, etc.). Additionally, the picture (see above) of the Brazos river is a picture that would have been taken from a bridge; the view in the picture is such that the photograph is out over the middle of the river. What little of the steel work that can be seen in the photo cover of Rob's book matches quite nicely with the street image of the second Brazos river bridge from Google maps at the street level (see picture below).

After comparing the two (Google's street level picture & the picture of Rob's book) I did what any sane REH nerd would do and google mapped my home address (I live in Texas, the D/FW area) with the bridge. It was only one hour away from my house. Time for a road trip. Dragging my wife into the matter—I had to have someone take a picture of me on the bridge, right?—I convince her to drive with me to the bridge. This past Sunday morning (7/17/2016) we did just that.

After an hour of travel down various back roads, we finally arrived at the location of the bridge. We parked the car and walked out onto the bridge. It was quite worn out. In fact, just prior to walking onto the bridge, tied to two opposite trees were yellow warning tape with ends that had been clipped and left hanging. Once out on the bridge, I wondered if law enforcement (or the Texas Highway Department) had placed the tape across the road in order to warn people to stay off the bridge, and someone had clipped the tape at both ends. I could see why that might have been the case once we were on the bridge.

The bridge itself had been paved, and re-paved over the years. At several connecting points between one portion of the pavement to the next, several holes had been worn through the road and the bridge itself. Undeterred, my wife and I, with Rob's book in hand, ventured farther out on the bridge. The steel structure certainly matched that of the bridge in the front cover photograph of Herbert Klatt.

Naturally, the shrubs and trees with years of growing freely were much thicker than they were in Klatt's photograph. But, here we were standing on a bridge near Walnut Springs, TX that looked exactly like the bridge in Klatt's photograph. I am convinced that this is the location (and bridge) where Herbert C. Klatt stood and had his photograph taken. I took another photograph similar to the view of Herbert's picture (above) of the Brazo's river. Obviously, the river waters were substantially higher the day Klatt took his photograph. Additionally, this is the only crossing over the Brazos river that is remotely close to Walnut Springs, TX. All this certainly seems to substantiate that this is, in fact, the bridge Klatt was standing upon in the cover photograph, and is more than likely the bridge from which he took the Brazos river picture.

Now, here's a little bit of history I managed to find online about the bridge:

In the late 1850s business partners Charles W. Smith and Tom Willingham saw the Brazos River and saw opportunity. They built a gin, mill and store for their own interests and in 1860 a school was built followed by the Brazos Point Community Church nearby. The community was granted a post office in 1873 and the 1880s seems to have been the town's high-water mark. The population reached 200 and besides the gin, store and gristmill, they gained their very own physician. But a few years later (1896) the population had declined to 75 and the post office had closed its doors.

The community moved to FM 56 and in 1914 the county contracted with the Austin Bridge Company to erect a bridge across the Brazos (which still stands alongside a modern bridge). The population was estimated at only 50 from 1933 through WWII. No figures were available after 1947.

The closest towns to the bridge are Walnut Springs, Glen Rose, and somewhat farther than the first two, Waco, TX. If you are interested in a little more history about Robert E. Howard and his friends, then I highly recommend Rob's book, Lone Scout of Letters. I have used his book in the research for my upcoming book project for The University of Texas Press. It provides great insight into REH's circles of friends, how they interacted with each other, and how they influenced each other. And, of course, it helps REH nerds like myself to find wonderful places like this bridge!