The Ships of Hy-Brasil Part 1 by Barbara Barrett

In his poem, the “Isle of Hy-Brasil,” REH brings to life the fabled isle that existed even when the pre-historical islands of Atlantis and Lemuria were still afloat in the Atlantic and Pacific oceans. According to Wikipedia, the isle, also known as Brazil, Hy-Brazil, and several other variants, is steeped in Irish myth. It is a legendary phantom island cloaked in mist, except for one day each seven years when it becomes visible but still unreachable. Similar in myth to that of St. Brendan’s Island (var. Brandon) it is shown as being circular, often with a central strait or river running east-west across its diameter. Despite failure in the attempts to find Hy-Brasil/St. Brendan’s Island, it appeared regularly on maps lying southwest of Galway Bay from 1325 until 1865. 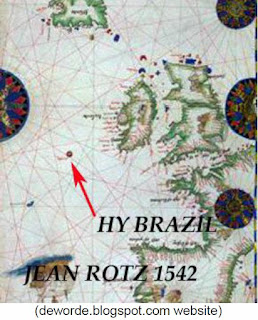 Howard’s “The Isle of Hy-Brasil” is more than a historical description of this island and its myth. It is essentially about the many different types of ships that are anchored along its shores as seen through Howard’s eyes.

To see how awesomely beautiful the shoreline of this ancient island would have appeared when lined with these ships, images of each ship type as well as a description have been added below.


There’s a far, lone island in the dim red West
Where the sea-waves are crimson with the red of burnished gold,
(Sapphire in the billows, gold upon the crest)
An island that is older than the continents are old.

For when in dim Atlantis a thousand jeweled spires
Burned through the twilight in the ocean’s dusky smile,
And when mystic Lemuria glowed with myriad gemming fires
Strange ships went sailing to seek the wondrous isle.

And when the land of Britain was a forest for the deer
And the mammoth roamed the mountains and the plains were veiled in snow, When the dawn had swept the ocean and the air was crystal clear
The ape-man looking sea-ward caught the distant topaz glow.

When Drake went down to Darien and Cortez sailed the Main
And the wide blue Pacific lay like a summer dream,
From the gold-decked bridges of the galleons of Spain
Far upon the skyline they saw the island gleam. 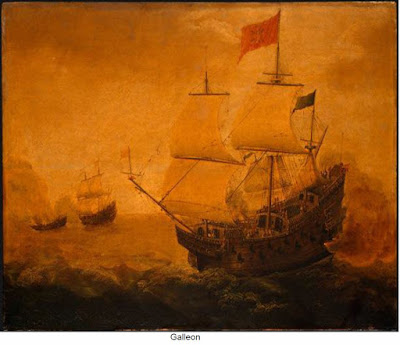 "A galleon was a large, multi-decked sailing ship used primarily by the European nations from the 16th to the 18th centuries." [1] "The galleon was 100-150 feet long, 40-50 feet wide, carrying about 600 tons (although some were bigger)." [2] "Whether used for war or commerce, they were generally armed with a medium sized cannon. A lowering of the forecastle and elongation of the hull gave an unprecedented level of stability in the water, and reduced wind resistance at the front, leading to a faster, more maneuverable vessel. The galleon was powered entirely by sail, carried three to five masts, with a lateen sail on the last (usually third) mast. The Galleon ship was favored by pirates because it was sturdy in battle and able to carry large loads of supplies and loot.[3]

"It flashes in the Baltic, dimly glimpsed through driving snow,
And it lights the Indian Ocean when the waves are lying still,
It dreams along the sea-rim in the twilight’s golden glow,
And mariners have named it The Isle of Hy-Brasil."

"For sailing ships are anchored close, about that ancient isle,
Ships that roamed the oceans in the dim dawn days,
Coracles from Britain, triremes from the Nile,
Anchored round the harbors, mile on countless mile,
Ships and ships and shades of ships, fading in the haze." 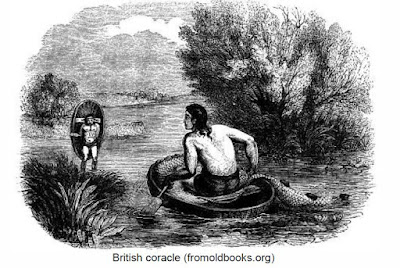 A coracle is oval in shape and very similar to half a walnut shell, the structure was made of a framework of split and interwoven willow rods, tied with willow bark. The outer layer was originally an animal skin such as horse or bullock hide, with a thin layer of tar to make it fully water proof. Today, it is made of tarred calico or canvas, or simple fiberglass. The structure has a keel-less, flat bottom to evenly spread the weight of the boat and its load across the structure and to reduce the required depth of water — often to only a few inches, making it ideal for use on rivers. 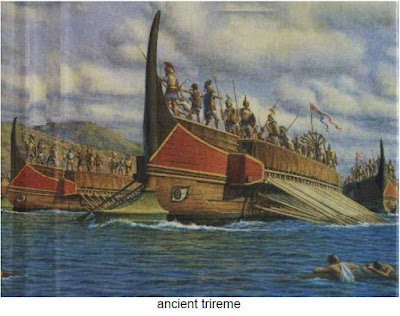 "In its day, the trireme was a 'state of the art' fighting ship designed to cover long distances quickly under oar and sail and in battle to ram enemy ships with devastating effect."[4] It was a class of warship used by the ancient civilizations of the Mediterranean, especially the Phoenicians, ancient Greeks and Romans. It derives its name from its three rows of oars on each side, manned with one man per oar. As a ship it was fast and agile, and became the dominant warship in the Mediterranean from the seventh to the fourth centuries BC. Triremes played a vital role in the Persian Wars, the creation of the Athenian maritime empire, and its downfall in the Peloponnesian War.(Wikipedia)