Older Than The World: The Staff of Solomon Kane by Todd B. Vick

The single most interesting item in all of the Solomon Kane stories is his staff. Given to Kane by an ancient African Shaman named N'Longa. The African Shaman acquired the staff in ancient Judea. "This staff is older than the world! It holds mighty magic! I have read of it in the old iron-bound books and Mohammad—on whom peace!—himself hath spoken of it by allegory and parable!" Thus detailed old Yussef the Hadji about Solomon Kane's staff from the story The Footfalls Within by Robert E. Howard.

In The Footfalls Within the staff is described with a cat-head which is the head of "a goddess of ancient Egypt." It was also used by Musa (Moses) to perform wonders in front of a Pharaoh. For several centuries the staff was also "the scepter of Israel and Judah and with it Sulieman ben Daoud drove forth the conjurers and magicians and prisoned the efreets and the evil genii." 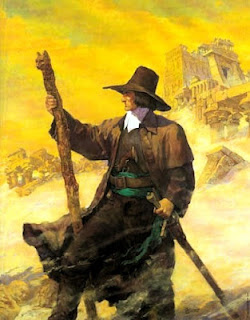 The staff is made of a wood that exists nowhere on the earth. In fact, the material is said to have "grown in some world apart." In other words, it is "other worldly." The staff is pre-pyramidal yet contains engravings that are hieroglyphics (added later). The cat-head has a subduing nature to it, described by Howard—in The Footfalls Within—that sometimes when Kane looked at it he had a "peculiar feeling of alteration." So it has power. N'Longa can use the staff to communicate with Solomon Kane over long distances. It's been used to slay the undead (vampires) and harpies (mythical creatures).

Unfortunately, in Michael J. Bassett's film adaptation of Solomon Kane the staff is not mentioned or used. That alone would have given the film a more genuine feel to it. Regardless, in Howard's stories, Kane's staff has always been a tool to fight evil, regardless of who used it.

Lastly, the staff has a nice mysterious history and quality about it, making it one of the more fascinating "weapons" created by Howard in any story. Moreover, the fact that it lands into the hands of Solomon Kane is certainly no accident. For Solomon has devoted his life to the very thing the staff seems to be created for; namely, to fight evil. It's as if the two were made for one another and through circumstance and fate, the two end up together fulfilling that purpose.

(The picture provided above is from the cover art of the Del Rey edition titled The Savage Tales of Solomon Kane. The artwork is by Gary Gianni (c) 1998.)

I was just watching the video today on NetFlix. I was hoping to see the staff. When it didnt appear, I started reading about it online and found your site.

Welcome to the site, Robert.